THE END IS NIGH!

You can also click on the “adventures in remodeling” tag to see the collection of horrors on the same page. In case you’ve forgotten, here’s why I label these posts in French.

This week’s adventure is my office!

Remember once upon a time I told you that the office was previously wallpapered and its removal had revealed a terrifying shade of yellow? Yeah. Here you go: 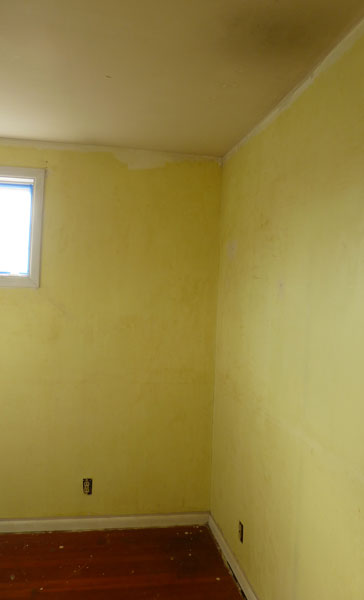 The floor in here was carpeted when we first moved in, and the people who lived here before didn’t bother putting down dropcloths when they painted (as they were going to carpet), so it’s covered in old paint splatter.

My friend S. and I spent days removing the wallpaper earlier this spring, and despite our best efforts, there was still a lot of glue and other nastiness on the walls in here, so before I could paint, the walls needed another good scraping/scrubbing. That took an entire evening in itself to finish. Next up, the taping around the windowsills and so on (you can see that in the pic above). Removal of the outlet covers, and onto the first cover-up coat.

We were a little short on paint here for this. I had an entire gallon of Glidden Ultra-Hide white, which the ceiling, trim, and baseboards stay, but there was a little accident with the paint can and a great deal of paint ended up being taken from the dropcloth instead of the can. Fortunately we had just enough to cover the ceiling and trim for the first coat. I ended up going to Home Depot for more paint and tape the following morning. You can see the results and the fact that it’s now nightfall here: 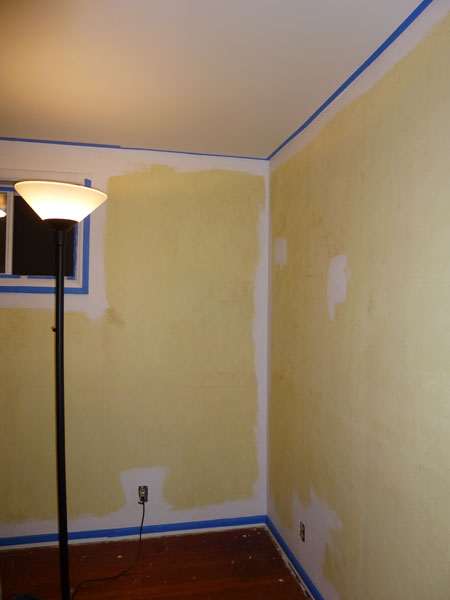 After this, it was still technically early, and we had enough beige paint for at least two coats, which – this room being lighter than the others we’ve previously painted – we thought should be plenty for this room. So, we got to work on the first coat and called it for the evening.

The next day while I went to Home Depot to pick up more paint, He Who Enables My Crazy knocked out the second coat of Fucking Beige (hereafter abbreviated “FBOMGIC” – pronounced “effbombgick” for “Fucking Beige OMG I Can’t”). I forgot to take a picture of the first coat before I left, so here’s one of what it looked like after he finished the second coat: 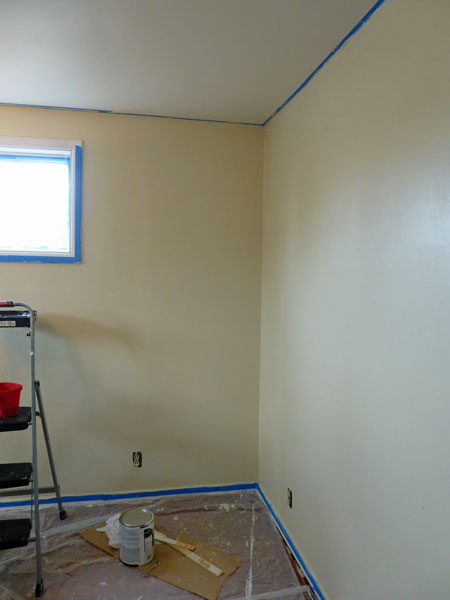 We let his second coat dry for an hour or so, then I went back in, taped off the windows so I wouldn’t ruin his new paint around the trim, opened the new can of white I picked up and got to work on the second coat around the windows. I let that dry the rest of the day, then later that evening pulled all the tape off and that was that. The office was complete: 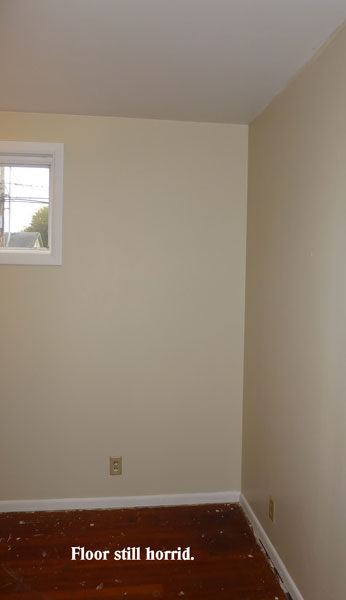 For those following along at home, the completion of the office brings the upstairs to 90% complete. 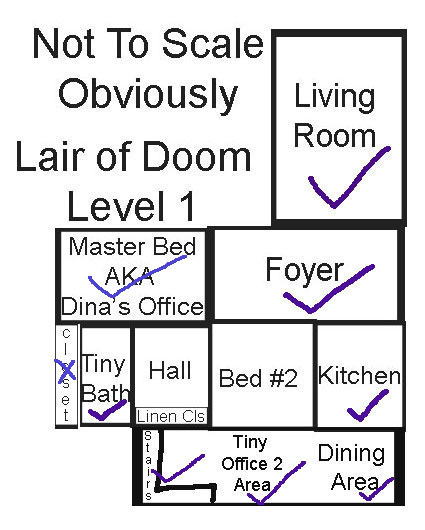 All that’s left is our bedroom and the Last Remaining Bastion of Gothdom in the hallway. I NEED THAT BASTION. It’s my only sanity in this Mundane Makeover.

I will say, though, that the beige in here – though not a color I would ever choose to live with – is vastly more endurable than the terrifying shade of yellow this room used to be. That yellow was so garish, the FBOMGIC is almost bearable.

What’s next? Well, it’s going to be a busy couple weeks. Lots going on. Shout-out here to Awesome Friend R. for her help in organizing the chaos in the garage. I’d have no idea what to do with that giant mess if it weren’t for her expertise in the realm of re-homing items, and I am grateful she made the time to come and sort things out with me.

As you can see from the schematic, the Cat Room/Library is nearly complete. There’s just a few totes to go through and some cleaning to do down there before we can prep it to be painted. We also repainted the stairwell FBOMGIC because reasons, and I’ll give you pics of that later. The utility room is done and now serves as something of a staging area for Things To Go To The Storage Unit. The workshop is coming along at a nice clip, too, so I can now see light at the end of the de-Gothening tunnel. 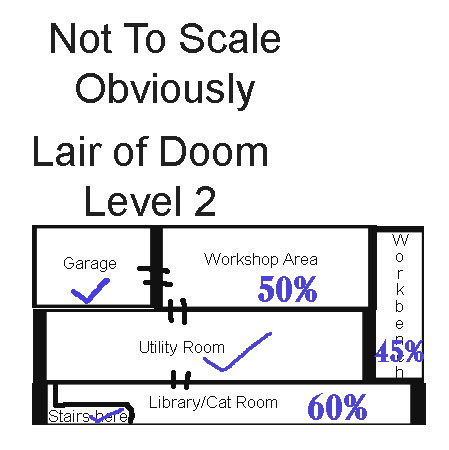 Oh, I promised you photos of the twenty-plus totes of books I’ve taken to the storage unit. I kept forgetting, but the last time we took a load over, I snapped one. Here you go: 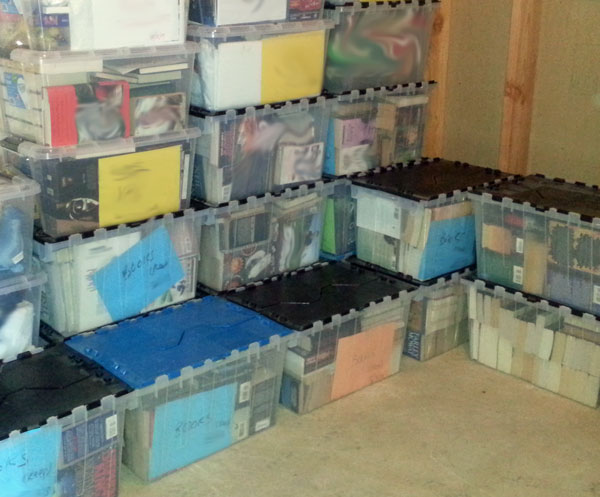 Now, not all of those totes are full of books. (And there are some totes not pictured.) The majority of them are, and there are still a few downstairs to take over. We’re still working down there, and sorting out the “keep” books versus the “Powell’s tote” versus the “donation” ones, so I have no doubt that once we’re finished (soon, now), there will be more to go over. I’m guessing by the time we’re done, there will be at least thirty totes full of books over in the storage unit. DON’T JUDGE ME. WE LOVE OUR BOOKS. WE’VE GOTTEN RID OF SOME. (SOME!) We’re also going to keep some books here because reasons.

So that’s all I have for you right now on the de-Gothening front. I am so sick of boxes and totes and papers and everything that’s accumulated in this house the last *mumblemumble* years. I’m angry at myself for letting it get this bad. I’m trying hard not to slip into a malaise of mundane, but every room that joins the Mundane Makeover pierces my dark and evil soul. Fortunately my friends and family are keeping me sane with movies and Vaders and tea and chocolate (thank you, D.!) and pretty Goth things, like these awesome handmade tiaras made by my friend Valtinen. He’s taking commissions, too, so if you’ve got a wedding coming up or anything else (Halloween is around the corner, so if you need anything cool like this for your costume or just everyday wear, get your order in now!), drop him a line. His prices are excellent and the workmanship brilliant. Go. Give him money. Get something beautiful. If flowered tiaras aren’t your thing, he has other awesome stuff for sale. If you have an idea in mind for something Gothy you want and you don’t see it, mail him!

It’s almost over. I keep telling myself that – it’s almost over. I’m planning to list the house in a couple weeks, and we’ll see what happens then. I’m really proud of all we’ve done over the summer, and I’m actually really glad that the things we put in totes and boxes to “go through later” are being dealt with, but holy hell am I tired of it.

But every time I want to quit, the neighbor’s little yappy rat-dog starts barking, or the neighborhood hellions scream by on their skateboards and motorcycles, or I hear someone setting off illegal fireworks and scaring my animals, or sirens start blaring, or some idiot cruises down the street with their bass turned up so loud it rattles my windows and deregulates my heart rhythm, and I want to go get another paintbrush and start on something else. Because every room finished brings me one step closer to getting the fuck out of this place, and that’s what all this is about.