No, really. “Six” in French is spelled exactly the same as it is in English, only it’s pronounced “sees.” So this is part six.

Click their names to see parts Un, Deux, Trois, Quatre, and Cinq. You can also click on the “adventures in remodeling” tag to see the collection of horrors on the same page. Also why I label these posts in French.

Got all that? Onward to Part Six, then!

After procuring more paint, we spent a couple days decluttering the dining room/He Who Enables My Crazy’s Office part of the living space. This piece of the house has a stairwell that leads down into the Library/Cat Room, utility room, workshop, and garage. See? 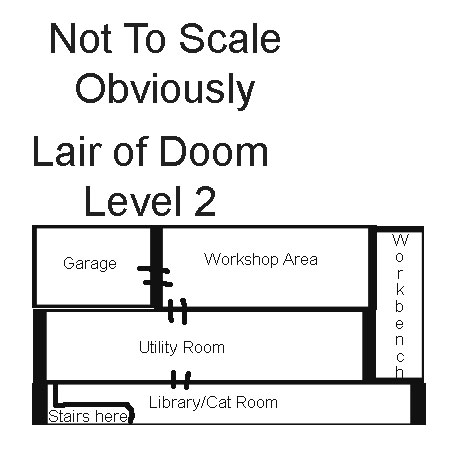 This part of the house has a lot going on, and it took awhile to get things moved into the other room. Also, once upon a time, there was a Staircase of Doom in place of the Pretty Oak Stairs. It was spiral, old, and broken in several places: 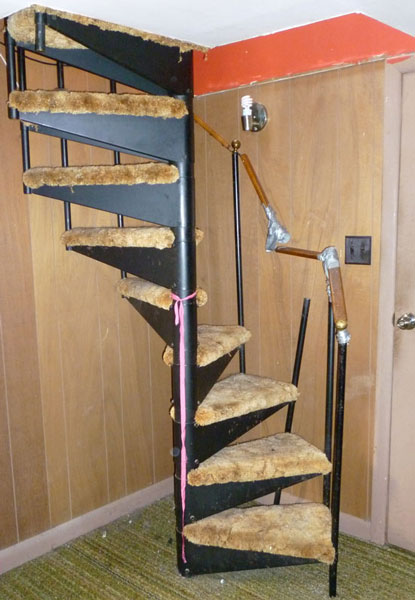 Staircase of Doom was replaced with Pretty Oak Stairs, and in doing so, a few square feet of floor space was sacrificed to make room for actual, usable stairs, which you see in the photographs below. Why am I mentioning this? Well, I’ll get to that. First things first.

Here’s how the dining area/Office #2 looked before. It was an ill-chosen shade of red-orange that looked completely different in the store. It was called “tomato bisque.” I hated it from the first moment we applied it, but you can’t return tinted paint, so it was buy more paint in another shade or live with what was done. You can tell which we chose. 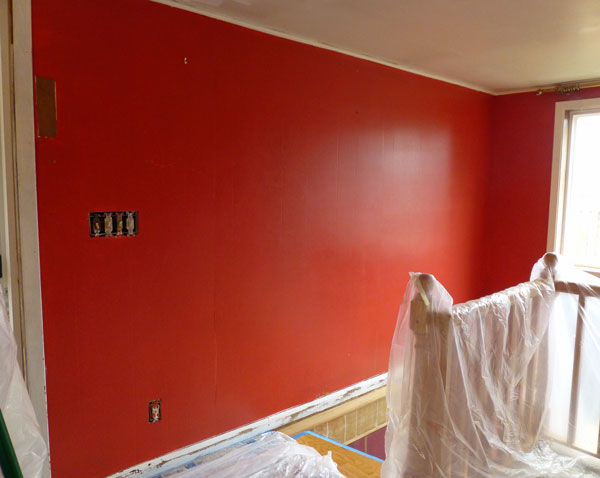 Personally, I was kind of glad to see this hideous shade of red disappear under the first coat of Ultra-Hide white: 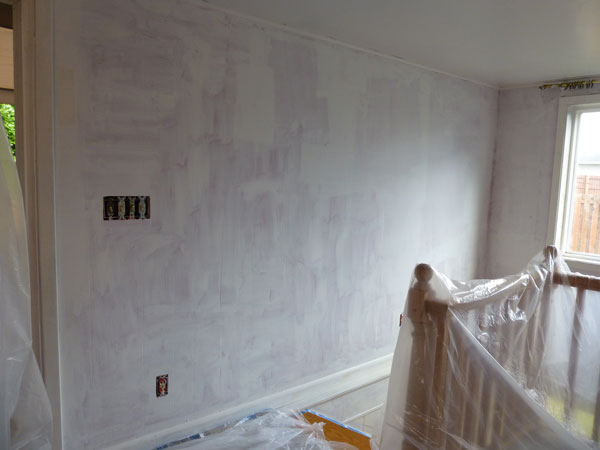 I want to stress here that this first coat took hours. 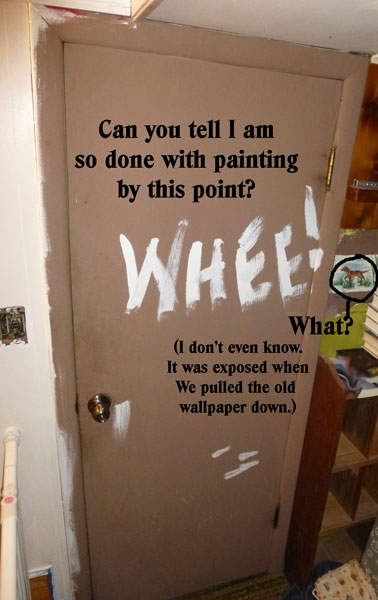 Remember the staircase I mentioned? Yeah. When they replaced it, there was some paneling they had to replace (why they didn’t just put up new drywall, I don’t know), and that meant I had to sand that down and fill the fake grooves with paintable spackle so it made a nice flat surface to paint.

Oh, hadn’t I mentioned that before? Yeah. It’s in the living room above the hearth too. And in the foyer on the north wall outside the kitchen. Yours truly personally sanded every square foot and filled in each groove with paintable spackle long ago so that it could be painted. Now you can’t even tell it’s paneling unless you’re told it is, or the light hits it just so and you can faintly make out the grooves beneath the layers of paint. You can see the paneling in the Staircase of Doom photo. The prep for this area of the house was insane and took an entire evening by itself. The following day, the last of the furniture was moved out, dropcloths were spread around, Awesome Friend S. came over (I’ve mentioned before how painting is a great love of hers and I’m so lucky to have her help and enthusiasm.) and we got started. But I digress.

We let this coat dry, got some lunch, then came back and hit the second coat hard. It was decided by consensus to leave this room white for various reasons. Among them, this is the dining room, not really “living space,” and it’s off the kitchen, which is white, and the ceiling is continuous and makes a nice transition, and so on. It was the best decision, I think, given how much of a bitch it would have been to tape the crown molding around the staircase. Why? Here. A thousand words and all that: 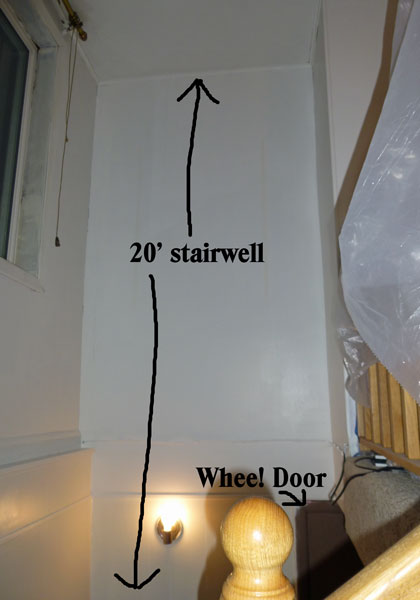 Yeah. Even with the tallest ladder we could borrow, it wasn’t enough to paint without an extension pole. There’s no way even HWEMC could have gotten up high enough to tape things off for a beige coat. I’m considering buying a 20′ ladder because reasons, but that’s an expense I really don’t need to assume right now.

So it’s white and going to stay that way. Besides, with the second coat up, it looks okay. I mean, for a Mundane Makeover and all: 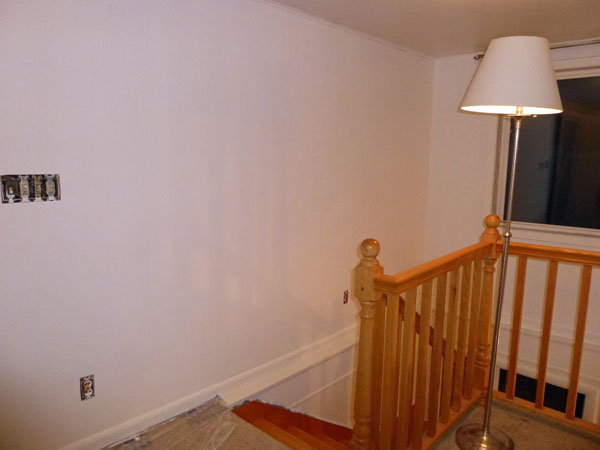 We let that second coat dry overnight, and put things back together the following day. Despite being white, I think it looks a lot better than the red. Someone will love it, I’m sure. If they don’t, they can choose a different shade. For now, it is what it is. 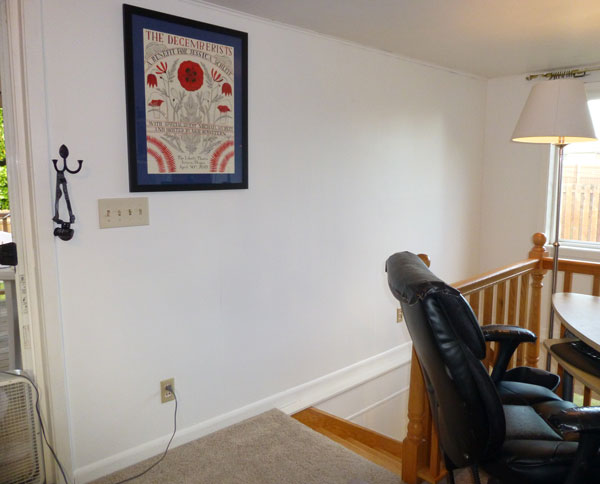 So there you have it. By my count, I have the Cat Room/Library to deal with (that needs decluttering in a major way before it gets a fresh coat of white – the Whee!Door will be painted over then), the bedroom, my office/master bed, and the Tiny Bastion of Gothdom that is my hallway left to paint.

I’m going to need more paint. Yes, more. The dining/office/stairwell area used two and a half gallons for just two coats, and the ceiling only got one (because that was all it needed – it was already white and just needed a fresh coat).

Putting things back together presented some new options, and we consolidated some things. We had two free-standing pantry cupboards when we really only need one, and a corner cabinet I love had been holding a lot of unnecessary junk. It’s now going to be used to display my beautiful Depression Era black tea service (at least SOMETHING in that room will have a touch of Gothdom left).

Now, the corner cabinet sits in a corner (duh) of the dining room, and underneath it there are two small doors to a lower compartment. In that compartment was an appliance I’ve had for over fifteen years. I’d rarely used it (maybe ten times since it was given to me as a joke) and thought about putting it in our planned yard sale for that reason, but after a good cleaning/testing of it, I have decided I’m not only keeping it, it’s staying on the counter for daily use. I’m so glad I “found” it again, and this time I know how to use it properly.

What is it, you may ask? BEHOLD, TEA JUNKIES! 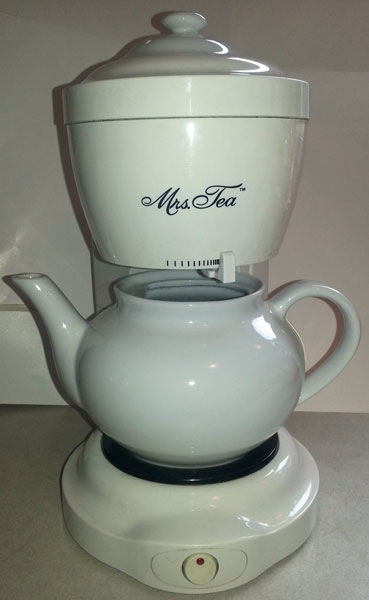 YEAH, BABY! This thing makes an entire pot of loose leaf (or bagged) tea and keeps it warm as long as it’s on. It’s a COFFEE MAKER FOR TEA DRINKERS! (It was given to me as a joke because I always drank tea instead of coffee like my parents, so ha ha get Dina a tea machine she can set next to the coffee maker. Joke’s on them – I love the thing and am glad to have rediscovered it.) Why this Thing of Awesome is off the market, I don’t know. I mean, I do know, because it’s on the Internet, but I think it was a horrible decision. Seriously, what tea drinker doesn’t want one of these? These things are going on resale sites for like $180. They were $50 new. I have alerted all my family and friends to be on the lookout for them, and if they see one (that works and is in decent shape with all the parts) for resale for under $50 to nab it for me and I’ll reimburse them. I absolutely love this machine and it would be nice to have a backup.

I’m not sure what’s next for the deGothening. The largest and hardest parts of the house are done now, and we’ve been working diligently on the utility room, getting that decluttered. We’ve already made one trip to the dump and redistributed a huge chunk of the things we want to keep versus the things that can go into the planned yard sale. I think for the next week or so I’ll work on getting more things sorted out. My office needs a good decluttering/repacking (I’d just shoved everything in totes when I moved it from the second bedroom to this one, intending to put things back out until we decided to sell) before we can paint it, and I’ve been working on that an hour or so now and again. Most things now require decluttering before they can be painted, so it’s a toss-up between my office and the library.

I’m going to figure on the library first, because it’s mostly packed up. All it really needs is a few more trips to the storage unit before it can be painted. We’ll see.

For now, though, I’m going to enjoy my cup of tea, made by my awesome tea machine.