I’m labeling these DeGothening parts in French because it makes the process sound way more sophisticated than it actually is. Also, American slang for “excuse my cursing” is “pardon my French,” and there’s a lot of profanity involved in this endeavor. So there you go. Onward!

This week it was time to deGothify the Dread Foyer. Why do I call it this, you ask? Because not only was it black and silver, it was also the first room you take in upon entering the James Household. Of course it should be the Dread Foyer; every lair should fill a person with dread upon entry, otherwise it’s not a lair! Cross the threshold at your own risk, abandon hope ye who enter and all that…you get it.

It’s also called the Dread Foyer because it’s FUCKING HUGE and I was dreading giving it the Mundane Makeover. (AKA OH GOD OH GOD IT’S BEIGE IT’S FUCKING BEIGE I CAN’T) I shit you not…the foyer is the largest area in the living space of the house at (I measured here just for you!) 20.9′ x 9.6′. I’m going to include a perspective shot at the end of this post, so remember these measurements. Rounded up, that room is almost 21′ x 10′. That’s 210 square feet. Seeing as how my loo (bathroom to those who don’t speak the Queen’s English) is only about 45 square feet (counting the tub – 36 without. What? I was measuring the floor in there, because that needs some work too!) To drive the point even further home, you could fit nearly 5 of my loos IN the foyer, COUNTING the tub, or about 1.5 bedrooms. So yeah…Dread Foyer is HUGE in comparison to the rest of the house.

As it was the largest, most open room, it was also full of display cabinets, each filled with various memorabilia and collectibles I was not looking forward to packing. Now you have that little picture in your head, you’ll understand why it took two days to finish (just like the living room, which is significantly smaller at about 150 square feet counting the hearth). Everyone ponied up for this ride – friends S. and T. were both on hand, as well as He Who Enables My Crazy – ALL AT THE SAME TIME. Here’s the before pic (with my beautiful black and silver paint!): 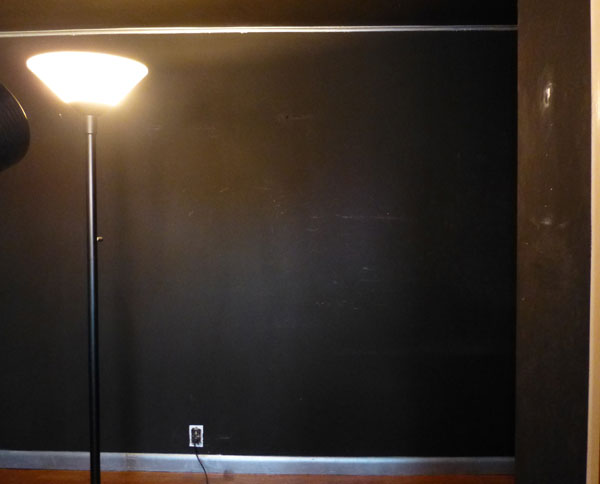 Each took a job and got to work. I was in charge of laying out/taping dropcloths and cutting in low – going around the baseboards and door trim (AKA “Dina is the smallest one here, so give her the job closest to the floor. Also she has the largest ass of all of us so won’t mind sitting on the hardwood scootching around the room on it.”). T. was on the stepladder to cut in above – using a paintbrush to cover the ceiling and walls where the roller wouldn’t get to, like the crown molding and corners. S. just likes to paint (this is a vast understatement, but go with it), so she had a brush and a paint pail (these are so awesome and helpful!) and started in on the wall closest to the kitchen door, and HWEMC (husband) had a roller on a broom handle in order to paint the ceiling.

We all traded-off now and again – once I finished cutting in, I helped S. paint the walls. HWEMC and T. traded ceiling duty (because that’s rough on your back, neck, and shoulders. HUGE ROOM I SAY!). After the morning’s work, we took a lunch/rest break and let the paint dry for a few hours. 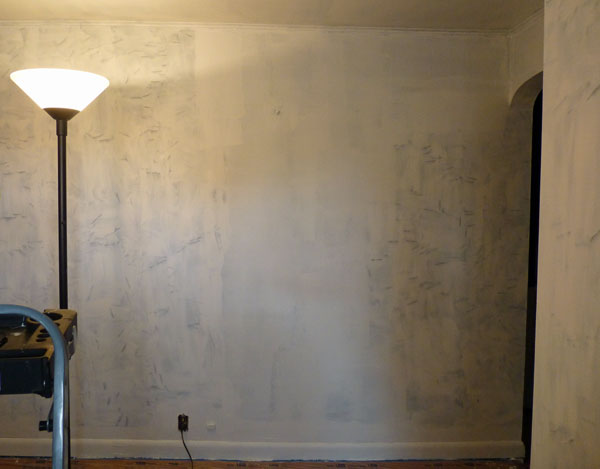 S. couldn’t return that evening, but T. did, so he, HWEMC, and I all set to work on the second coat of the base white. It didn’t take nearly as long as the first coat seeing as how everything was already cut in. The ceiling took the longest again, not only because of sheer size, but because there was some furniture in the middle to work around. You’ll see that in the perspective shot at the end. We finished the second coat in about an hour and a half, then left things to dry overnight. 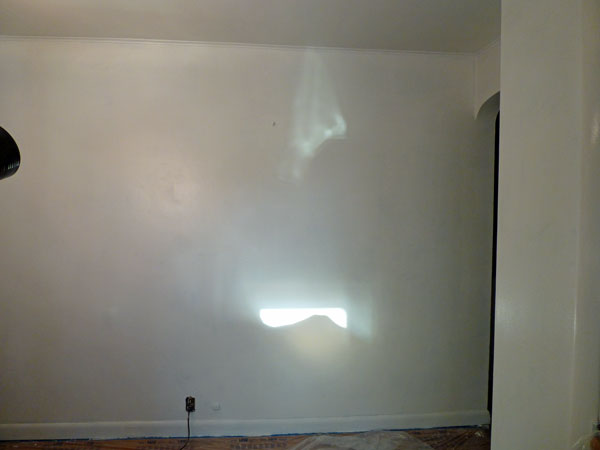 After feeding the woefully undernourished (AKA “they’re all on special diets because they’re all special needs furbrats and therefore I am cruel for not feeding them ALL THE THINGS ALL THE TIME”) horde, it was time for the Taping. I just…I…THIS TOOK FOREVER! Who thought it was a good idea to leave the ceiling and trim and baseboards white? WHO I ASK? Oh…right…that would be me…. Never mind then. So then…taping. 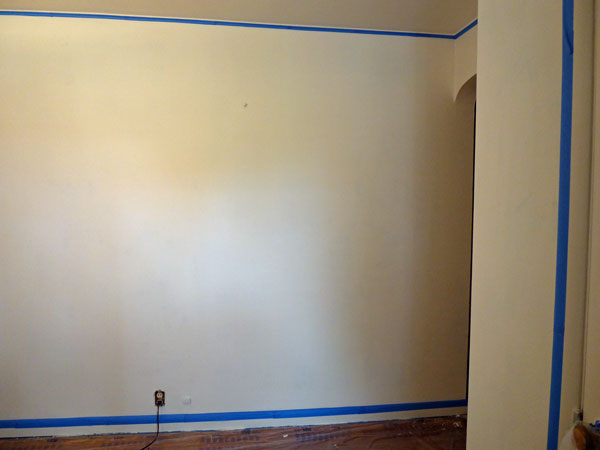 HWEMC had another engagement, which was fine as this part in the process was just painting the walls. Still big, but not unmanageable. Friend T. came over and began painting the walls I’d already taped off, and was halfway around the room before I finished taping. He left me space around the baseboards and crown molding to cut in where the roller couldn’t get. A little while in, HWEMC came back and took over for T (who had to leave, so it was more of a “changing of the guard”-type thing), and soon the first coat of the Fucking Beige (I’m sorry…”Navajo Sand“) was complete. 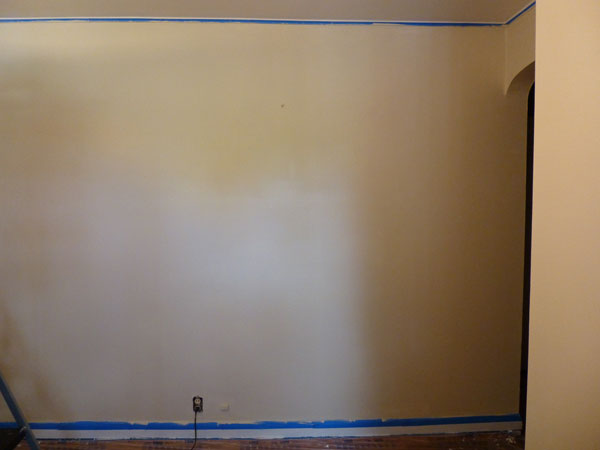 By the time we finished, it was lunchtime, so we made some sandwiches and took a little break. The paint requires an hour between coats to dry, so it was ready to be painted again after we’d eaten. The very last coat went so fast – we were finished in less than half an hour. We cleaned up, made things cat-safe (because there’s no such thing as cat-PROOF), then left it to dry. (Look, a pic that looks JUST LIKE THE LAST ONE, only the light has changed so you know it’s later in the day!) Two coats for this room’s walls alone took an entire can of paint. 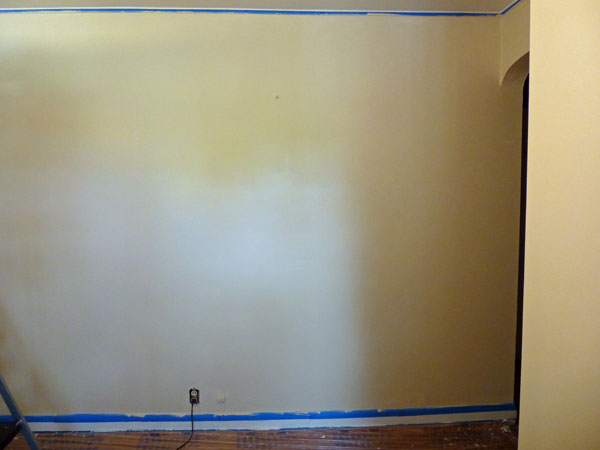 Later that evening, it was time to take the tape down. The Dread Foyer’s transformation into Mundane Way was complete. 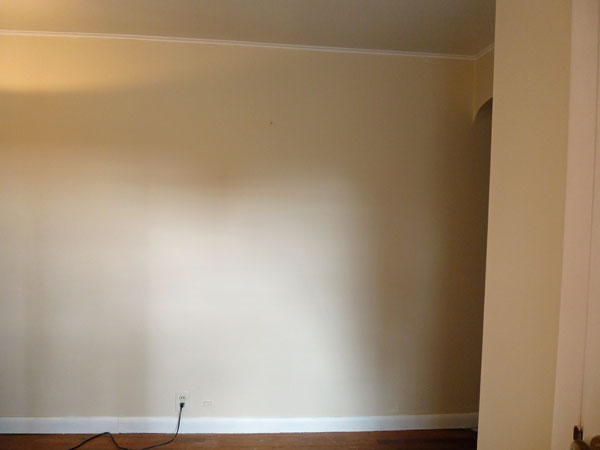 Remember that perspective shot I promised you? Yeah, here you go. This is taken from the archway you see in the previous photos (to the right) that leads to the bedrooms and loo. I put a paint can at the end of the room so you can get an idea of the scope. You can also see the furniture we moved away from the walls in the middle of the room there. We’d draped them with plastic to avoid paint splattering them as we painted the ceiling. 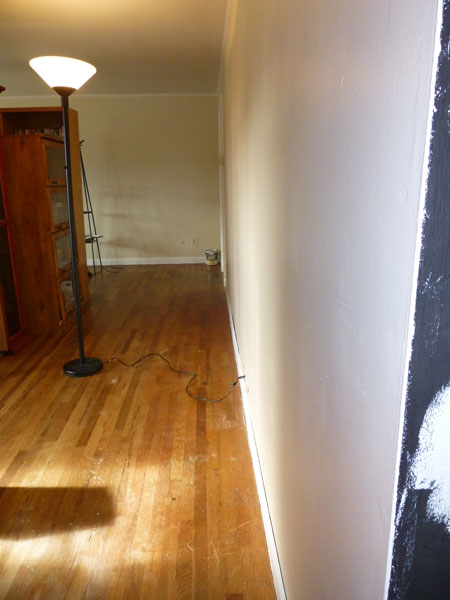 We moved the furniture back and that was that.

Reading back, it sounds so effortless. Like “la la la I’m painting my house room by room have some pics!”

No. It’s not like that. Not at all. This is a long, torturous process. What these pics don’t show is the four days I spent packing up all the collectibles and media into plastic totes, hauling them to the storage unit, then hauling one of the display cabinets there as well. There are two more display cabinets to take over (their contents are already in storage or redistributed to the one cabinet we’re keeping here), but that will have to be tomorrow or Sunday. After the last week of kicking ass on the Dread Foyer, I took a couple days to just veg. I binge-watched Orange Is The New Black while eating Ruffles potato chips with homemade onion dip. I ignored the dishes in the sink, and the laundry, and my email, and everything else that needs doing. I took a couple days completely off do to absolutely nothing but stuff I wanted to.

Well, not completely off. I bought and installed a new latch for my outside gate, a new (fucking beige) switchplate for the lightswitch in the foyer, and repaired a hole in the hallway wall (because it’s going to be painted soon too and when we were moving my office from the inside room to the one I’m in now, a corner of a desk or something caught that bit of wall and made a hole, which I’ve ignored for the better part of a year). I just can’t sit and do absolutely nothing – it drives me insane.

So, my foyer is now actually finished. And beige. Fucking beige. Next up, the loo. Why? Because it’s the smallest room in the house and I only have enough paint left to do that room. Paint is expensive, and I’m going to wait until the household coffers are full again before buying more. Also, did I mention it was the smallest room? After the Dread Foyer, I’m ready for a small space to paint. Also, most of that room is tile (it goes halfway up the walls to the backsplash), so really it’s just the ceiling and a couple tiny, tiny walls. No problem on that. Once I get it sorted out (cabinets gone through, mirror taken down, etc.), it shouldn’t take but a day to finish. (She says hopefully.) 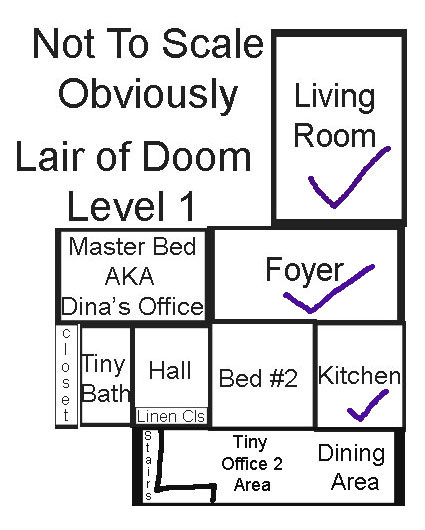 Oh, and we decided something during this Week of DeGothification. We’re going to put the house on the market once the living space is ready. Fuck the downstairs. We’ll work on that while the house is on the market. If I wait until everything is finished, I won’t be listing this house at all this summer. So next, the loo, then probably the dining area, then the smaller bedroom, then lastly my office (as it has the most shit in it to deal with – desk, my yarn stash, guest bed, book cabinets, etc.). After those and the little touch-ups on the outside paint are done, we’ll put the house up for sale. By my estimation, if we work hard and get shit done, we should be ready to list by the middle or end of July. Not exactly what I was hoping for, but better then than not at all this year.