It’s not that I haven’t had things to say or stuff to talk about, it’s just that blogging hasn’t been a huge priority for me. Then 2020…

I’m here today to talk about fighting the bear.

Once long ago I was talking to a friend about my annoying bitch of a disorder and how most people (50%) who have had MS as long as I have (15 years this year) develop a secondary type that is relentless. Over the next 10 years, that risk increases to 90%.

Now, we all know I’m evil and a fighter. No, not that kind. A literal fighter. Combat-trained, street brawler, knife fighter. It’s a long story, but I’ve said before my upbringing was unique. My first knife-fighting lesson was at age 6, and I loved it. But I digress.

Before this autoimmune nonsense, I was also a bodybuilder. Not the ripped Cory Everson type, but I spent a lot of time in the gym with weights and drinking protein powder. I still use some of what I learned from the Body-For-LIFE book back in the 90s. (I also have the Women’s version of the book and the cookbook.) I give my training and pre-diagnosis physical condition credit for how well I’m doing right now.

And I am doing well. You have no idea how lucky I am to be in the condition I am for this late in the game. Many, many others are in wheelchairs or are unable to drive or get themselves to the toilet. For all my limitations (and there are several; don’t get me wrong), I can still do those things. I need things like a shower chair and a cane to walk outside, but I can still feed and dress myself and hug my cats.

But one day, that won’t be the case. And when that day comes, that’s the day I fight a bear. 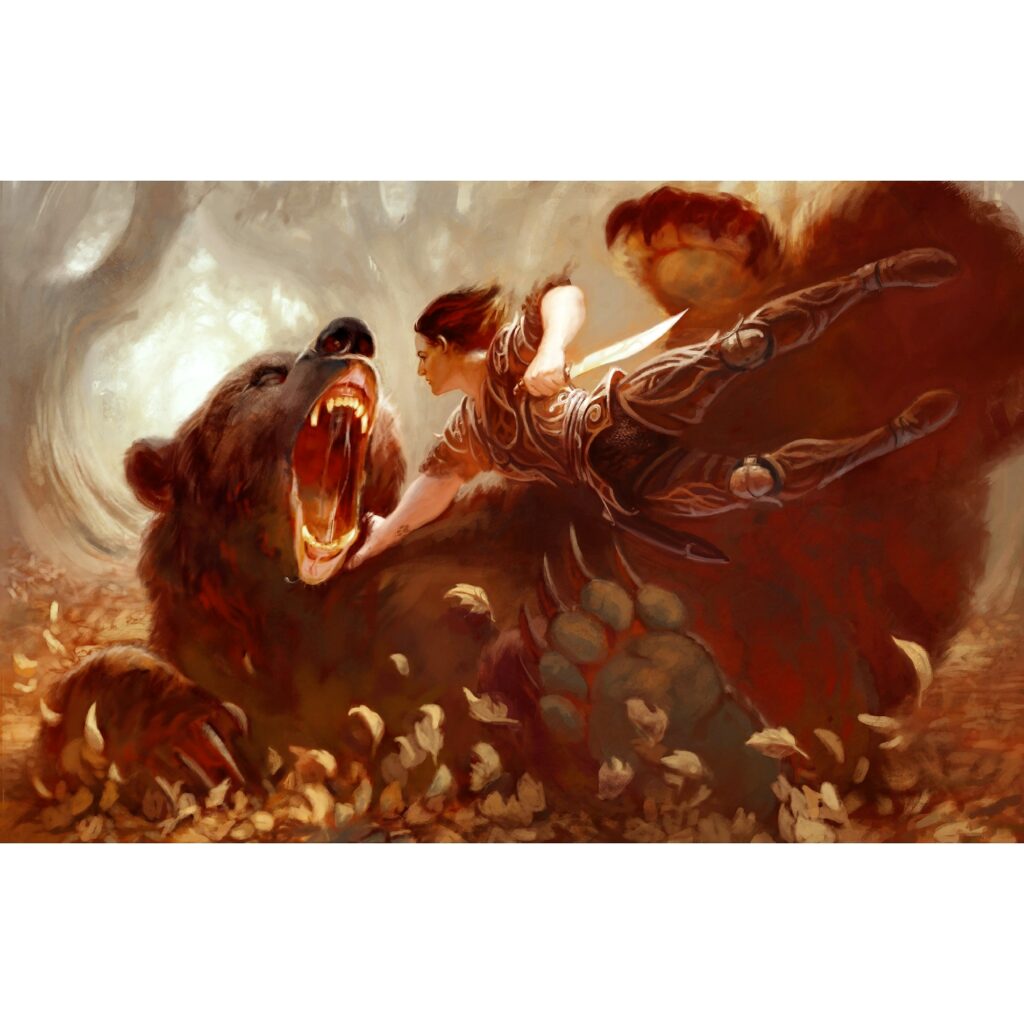 Dina vs. The Bear by artist Doruk Golcu

Yes, that is me. My Friends of Awesome commissioned this custom piece of art from the amazingly talented illustrator Doruk Golcu. They gave the artist the gist of the scene (okay, a lot more than the gist; there were some specifics that the brilliant artist didn’t bat an eye over, proving he is One Of Us) and some procured reference pics of Yours Truly, collaborated with Mr. James, and surprised me with it for my birthday. I absolutely adore it. Beyond adore. It’s my desktop wallpaper, my iPad screen, and the framed print they ordered and sent to me will be hanging in my living room.

Here’s the reason I’m fighting a grizzly bear, and what the painting truly means.

As I told my Friends of Awesome, when I am diagnosed with secondary MS and am at the point where my quality of life has deteriorated to an unacceptable level, I will take my Tank Chair (because I’ve been promised, when I need a wheelchair, it will be Tank Chair) out into the wilds of Canada to knife fight a grizzly bear. A male one, at midsummer, just before he gets super fat for the winter but has had enough time from the last hibernation to pack on the pounds so he’s not starving. Now, I will either win the fight and return home dragging a bear carcass behind my chair, or I will lose and they will never find my body because Griz ate the tiny Goth girl who came for him with nothing but a knife.

That piece of art means more to me than you might think. It’s a huge metaphor for my daily outlook. Because every day for me is a bear fight. Seeing that painting on my desktop or my iPad or in the frame reminds me of who I am. I fight bears. There are some days when the bear wins, and some days I win. As time goes on, the bear will win more often, but as I’m fond of saying: today is not that day.

Some days, when just getting out of bed costs more spoons than I have, I remember I still have knives. 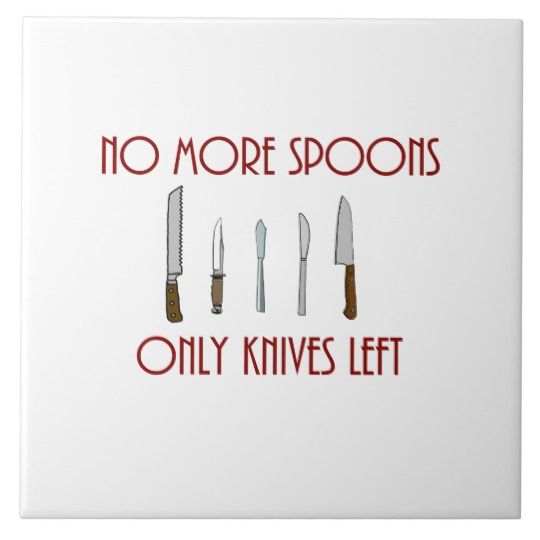 If this is your art, please let me know so I can credit you.

If I still have knives, I can fight. Maybe not as hard as I used to be able to, but I can still do damage. (And, in all fairness, my worst day is still better than many people’s best, so there’s that to take comfort in, I suppose.)

So why am I here, right now, blogging about knife fighting a bear? Because I said I’d tell the story behind the art. And that’s the story. It’s a gift from people who care about me that shows how they see me, even on my worst days. It helps me remember (because with MS, sometimes you need a lot of help to remember things, as it’s related to Alzheimer’s disease) that the bear fight is (probably) not this day. It’s been an uncomfortable week for me with my condition, and for awhile there I thought it might be time to find a bear soon. I did some Googling and found out the reason behind my bad week (here’s a hint: when the answer isn’t “you have cancer,” it’s “move your ass” AKA “get some exercise and you’ll feel better”), and I think (hope?) that I’m coming out of the spin I’ve been in.

Now it’s late and I’m tired, but I have written a blog post, which is more than I’ve done in months. Not quite ready to fight a bear, but I’m working on it.

Read at your peril. Feel free to repost/forward with credit to me as the author. END_OF_DOCUMENT_TOKEN_TO_BE_REPLACED

For those who don’t get the title, go see this.

IT’S SEPTEMBER! IT IS IT IS IT IS! I have my Scensty warmer going with a gorgeous scent (discontinued one…WHY?!?!) and am kicking back welcoming the start of fall.

It’s been an interesting few weeks. I had a little adventure with appendicitis and that’s over now. I’m fine – all is well. I’m sans appendix now, that’s all. But that’s neither here nor there. I have RANT FODDER to kick off my return to the darkness.

Cut here for length and those who aren’t ready for a Dina!Rant quite yet. END_OF_DOCUMENT_TOKEN_TO_BE_REPLACED

Read at your peril. Feel free to repost/forward with credit to me as the author. END_OF_DOCUMENT_TOKEN_TO_BE_REPLACED

WARNING/DISCLAIMER: THIS IS A DINA RANT. There will be language, NSFW, and heavy linking. If you’re okay with all that, read on.

WARNING: THIS IS A DINA!RANT. It’s long and bloody. There is language and pics and is generally NSFW. Enter at your own risk. END_OF_DOCUMENT_TOKEN_TO_BE_REPLACED

Read at your peril. Feel free to repost/forward with credit to me as the author if you feel like it. END_OF_DOCUMENT_TOKEN_TO_BE_REPLACED

Yet another SOPA post. This one is just to remind regular readers of my blog that my site, along with thousands of others, will be going dark tomorrow in protest of SOPA and PIPA. If you’re not familiar with what these things are, click here and see what all this is about.

There’s more about it here: http://sopastrike.com/.

Just a quick reminder. See you when this is over. For awhile anyway. If this bill passes, I may not be seeing you at all, ever again.

So if the internet is important to you, get involved. You know I hate politics. This isn’t politics. This is the criminalization of innocent people (like me) in order to punish a few assholes. This is Hollywood studios not wanting to get off their lazy asses and spend the money to go after these fuckwads on their own. Instead they’ll spend billions of dollars in lobbying Congress and the Senate to pass these stupid bills because they think it’s better to punish everyone to get their way instead of doing what “regular people” like me and you do in order to stop online piracy. You know, sending notices and so on. Tracking down pirates. Whatever. There are already laws designed to protect the copyright holders and stop online piracy.

THIS IS NOT THE ANSWER.

I’ll stop ranting now. Enjoy it. It might be one of the last rants you hear from me. Freedom of speech is under attack, so if you like my rants, scream at your Congressperson/Senator. TELL THEM YOU WANT YOUR DINA RANTS!

This was originally written/posted December 5, 2009 on my Livejournal. It’s still applicable, so I decided to dust it off, shamelessly copy and paste, and update it to post again. I think I might make it an annual thing.

Read at your peril. Feel free to repost/forward with credit to me as the author if you feel like it. END_OF_DOCUMENT_TOKEN_TO_BE_REPLACED

Like the pirate talk? It’s appropriate, because I’m going to rant in this post about e-piracy. This post will have language and various other “Dina has been sent into orbit” visuals.