Read at your peril. Feel free to repost/forward with credit to me as the author.

THIS IS A RANT. Turn back now/abandon hope all ye who enter here, etc. The content below contains language, opinion, general stuff that’s probably going to piss people off and hurt some feelings. Do not come whining to me if you get yours wounded, because YOU WERE WARNED.

Still with me? All right.

I am getting utterly sick and tired of people bitching and complaining about the “holiday season.”

Get that straight, people. It’s the HOLIDAY SEASON. There are multiple holidays celebrated this time of year, and not one particular group or religion has the monopoly on it, all right?

I am completely fed up with people bitching about the appropriateness of Santa, the Nativity, or even how holiday trees should be called Christmas trees and not “holiday trees.”

Someone sent us a Christmas card* with a newspaper editorial cut out, where this jumped-up little right-wing conservative goes on a page-long rant about how she’s offended that some people might be offended by her wishing them a Merry Christmas, and how she’s going to say it regardless of what people think because she’s not ashamed of it. How she looked for CHRISTMAS cards, not generic holiday ones, and is putting up CHRISTMAS decorations and a CHRISTMAS tree, etc., not “holiday” or “seasonal” things.

And that’s fine. Go her. I’m not against people wishing other people a happy whatever-they-celebrate. I’m against people saying “This time of year is CHRISTMAS and NOTHING ELSE! I’m going to wish you a Merry Christmas because It’s Christmas and that’s all!” This “opinion” piece published in a newspaper (in 2005!) just really rubbed me the wrong way for a couple reasons:

1) Christmas = Christian, and Christian is SUPPOSED to = TOLERANT. We all know it doesn’t, and people like the woman who wrote this garbage make the true Christians like myself look like assholes. Christians don’t need any help whatsoever looking like assholes as it is, and this woman just doesn’t help things. Really. *points to the fundamentalists* I’m not with them!

So what this woman who wrote the article is basically saying, to me, is this: “I’m a Christian and proud of it therefore I’m going to be completely intolerant and disrespectful to other people’s beliefs because I want them to acknowledge and respect my own, which are right and they’re wrong. This is my holiday and my reason to celebrate is more important than theirs and tough shit if they don’t like it or are offended by it.”

Lady, let me enlighten you about a few things.

1) You have your head up your ass. You are the reason Christians look bad to the rest of the world. You are PART OF THE PROBLEM.

2) Respecting other people’s opinions and traditions isn’t “politically correct” – it’s BEING RESPECTFUL. That person you just wished a “Merry Christmas” to – sure, they shouldn’t take offense at that if they’re not Christian. After all, it is Christmastime, and Christians are celebrating a holiday along with **three other world religions and an ethnic group. (Kwanzaa isn’t a religious celebration, for those who don’t know. It’s a celebration of African heritage.). Christ taught respect and tolerance, and you’re not being very respectful. But then, modern Christians have made an art out of being judgmental and intolerant, so you’re par for the course there. Moron.

3) It really sounds like you’re just upset because other holidays are finally being acknowledged and it’s infringing on what you see as a tradition. They’re getting a bigger piece of the pie, so to speak, and that offends you. Shut up and be grateful! Christians at one time were persecuted too, in case you don’t know that, don’t remember that, or choose to ignore that, and you’re basically doing the same thing to other cultures when you whine about how your traditions aren’t being respected or are being replaced.

And for the record, just because it’s a “tradition” doesn’t make it right or smart.

“It’s a Christmas tree, not a holiday tree!”

Um, actually, it’s a complete rip-off of a pagan celebratory item, termed conveniently to make both parties comfortable with a new idea.

I think Lawrence Kelemen said it best: “Christmas has always been a holiday celebrated carelessly. For millennia, pagans, Christians, and even Jews have been swept away in the season’s festivities, and very few people ever pause to consider the celebration’s intrinsic meaning, history, or origins.”

I guess the real point of this rant is I hate stupidity and ignorance, and the holiday season just seems to bring out the worst in people for that.

(Hey…you…stop that singing back there and pay attention! I’m ranting here!)

This is everyone’s or no one’s holiday, like it or not. That’s why the stores call things “holiday” now. Yeah, it started out as a lame attempt to be politically correct, and like all ideas that are intended to be good, it got stupid.

Now people are whining about how everything is “offensive,” and articles like this woman has written are the backlash to that. (Don’t get me started on how this whole season is offensive to those who don’t celebrate it at all, and these people exist!)

“I’m going to wish you a Merry Christmas whether you like it or not and I don’t care if it offends you! I celebrate Christmas! If someone wished me a happy Holiday-I-Don’t-Celebrate, I wouldn’t be offended and neither should they!”

All right, fair enough. And I agree with part of that. If someone wishes you a happy holiday-you-don’t-observe, just say “thank you, and to you” and GET ON WITH YOUR DAY. People take this “I’m offended by that/this offends me/this doesn’t respect my whatever” WAY too far these days. Towns can’t have a Nativity scene displayed because it’s done with taxpayer money and not all taxpayers are Christians and don’t want their tax dollars going to something they don’t agree with.

Again, fair enough. This is America, and we have the right to object to things like that. This borders on the “don’t make everyone else suffer for your idiocy” realm, but that’s a rant for another time.

People think that the “old ways” are somehow inherently better. Yeah? Well, it was once thought that bloodletting was a cure for a lot of things. That’s an old way. Shall we go back to that, or would you prefer an MRI? It was also thought that schizophrenia was caused by demonic possession. That’s an old way. Should we go back to that? CHRISTMAS WAS ONCE BANNED FOR OVER 20 YEARS! “Because of its known pagan origin, Christmas was banned by the Puritans and its observance was illegal in Massachusetts between 1659 and 1681.” Shall we go back to this tradition?

“Tradition” does not necessarily equal “better,” “good,” or “right.” Now I’m not going to get into politics here. I hate politics for the same reason I’m ranting here – it just shows off how rude, ignorant and intolerant people are of one another. Instead, I’ll just offer up “traditional marriage” as an example of how “tradition” doesn’t mean “right.” Changing a tradition is inevitable and usually for the best.

I’m a non-traditional Christian and proud of it. 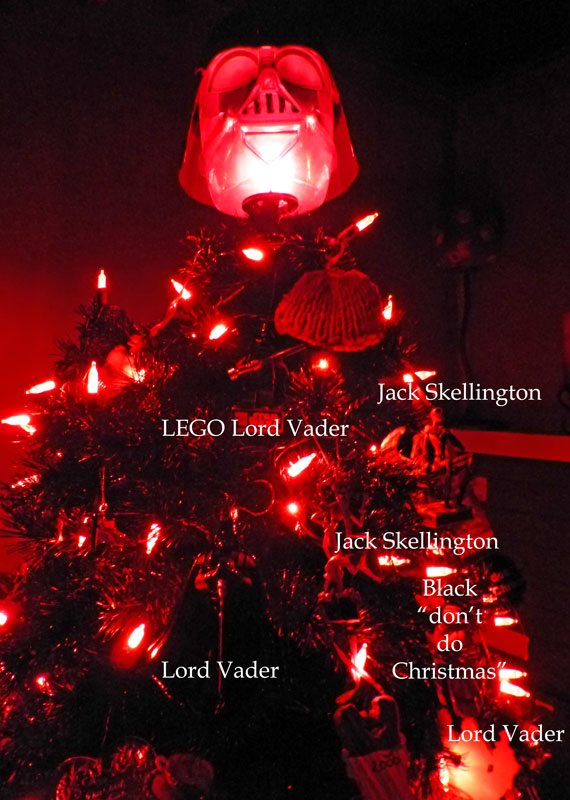 Every Sithmas tree needs a Lord Vader ornament or three.

I’d link you to the article I’m ranting about, but it’s from 2005 and I can’t find it online, despite looking. Take my word for it. I found references to the author of it, and yeah, she’s as big an idiot as she seems based on this article. Obviously the relative who sent this to us found it in stuff they save and sent it with all their cards, as it’s a photocopy. I’m tempted to write the woman (as her email address is included!) who wrote it and link her to this rant, but she’s obviously got her head so far up her ass that she wouldn’t be able to contemplate an alternative viewpoint. I wouldn’t want to get into a battle of wits with an unarmed opponent. I don’t have time for that.