Those who have followed me for awhile know I’m not the best at taking pictures or sharing them. Mostly because it involves tech and I’m not only horrible about taking pics, but I’m crap at getting them off the camera, then resizing, then all the other crap that goes along with it. As such, I don’t update with pics much (though I did pretty well during the De-Gothening).

Having said that, you’ll understand why these pics date back to September and I’m just now getting them posted. Because reasons, okay?! I do take pics with the intent to share them with you all, but I’m crap about it, so that’s why you get these pic!spam posts. They even have their own tag, so yay for that!

This is embarrassing, but I wanted to offer up proof here, for many reasons, that I will, under duress, drink that vile beverage known as “coffee.”

However! There are times…rare times…when I will subject myself to the horrific trainwreck that is coffee. It’s always with pie, and it’s always when I need far more caffeine than my beloved tea can provide me. The following pics were taken very late at night far away from my home, with half of a long drive still ahead of me. I needed the caffeine. So…

Here it is. The pot and the mug. (I use loads of sugar and cream.) 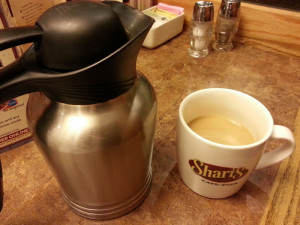 Here we have proof of imbibery (it was very late at night, so no makeup and murderousness amplified – cope!): 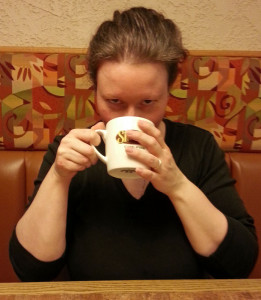 And the subsequent reaction, because no amount of sugar and cream can make it not taste like coffee. (This includes mochas/lattes/other foofy coffee drinks. I hate both the smell and taste of coffee, and nothing is going to change that.) 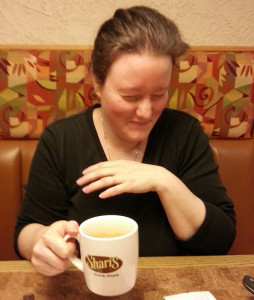 I finished the pot, though. Three-and-a-half cups of coffee does a lot for me. (You really don’t want to know what that is, either. I’m sure it was only the fact that it was staving off sleep that kept me from the emergency room due to arrhythmia.) Made it home safe and sound!

Fast forward to Sithmas. Despite the beige, it was a very nice holiday. Darth Santa brought me a TARDIS pillow – 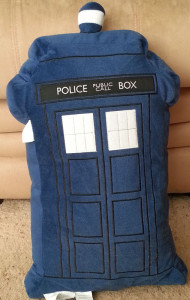 -and a new yarn bag! (It’s a rolling bag with wheels that light up red when it rolls! It holds ALL THE YARN!)

After the holidays were over and the Sithmas Tree put away, the Super Bowl arrived. For international readers, this is a very big important American football game (to some, anyway – I am not among them) which many celebrate with parties and food and so on. While the James Household rarely celebrates the occasion, this year one of the two teams facing off was from Seattle, so we were mildly interested in the outcome. He Who Enables My Crazy pulled the game up on our TV.

Now, American football is important to many of all ages and genders, but it particularly appeals to males. This apparently crosses species lines as well, because the Lord of Chaos developed a keen interest in the bright colors and men running around in tight pants after a pig skin filled with air: 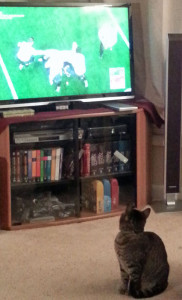 He watched for a good long while. He rarely watches anything (I once had a dog who looooooved TV – I had to leave it on for him when I left the house. He watched constantly.), but really loved the game. He made himself comfortable right there on the living room floor and just watched, glued to the game. He wandered off sometime before the finish (it’s a really long game!), but I managed to snap the pic before he did.

This brings us to our final pic in the line-up. Recently He Who Enables My Crazy celebrated the anniversary of his birth, and had been eying some kitchen items for awhile. (He loves to cook.) One thing he’d been wanting was a marinade syringe used for injecting marinade into meats. I found one and acquired it for his birthday. I didn’t bother reading the package at the store. But once I got it home and was preparing it for wrapping I noticed what it said… 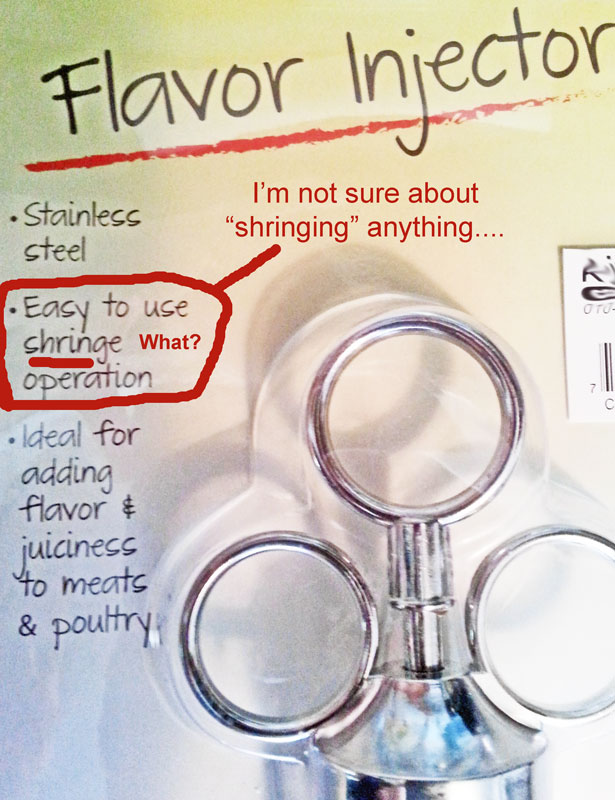 …um…yeah. Not sure I want any “shringing” going on in my house.

So there you are. Pic!spam from the last *mumblemumble* months! Enjoy! It will probably be another several months before I get around to posting more.