So…I’m kind of a technophobe. I know, I know. It goes against every geekery bone in my body. Tech is wonderful, I’ll admit, but I find most electronic gadgetry (except power tools, which are like my candy) intimidating and I really don’t like change.

I’ve had the same cell phone for approximately five years. I loved it so much it had duct tape on the back cover to keep it from falling off and I’d ordered extra batteries for it (WHICH SUCKED, BY THE WAY, AND DIDN’T DO THEIR JOB, JUST SAYIN’, ELECTRONICS STORE PEOPLE!) to keep it alive another year when it wouldn’t hold a charge anymore.

It was what I called a “dumbphone” (as opposed to you kids and your newfangled “smartphones”) and I liked it that way. No, I didn’t need a camera or to check my email or do anything but TALK ON THE PHONE. That’s what I wanted. A PHONE. Not a friggin’ handheld laptop.

But alas, Luddite tendencies or no, change is inevitable and one must evolve. So, when my dumbphone finally rang its last, I gave in and got one of them newfangled smarty-phones the kids all have.

Now, my dumbphone had a camera on it. It was all of 2.0 megapixels (What? SHUT UP!) and I never could figure out how to get pictures off the damned thing. I didn’t like using it as a camera, anyway. That’s what I have a camera for! You see my point here. So, when it came time to give up Old & Busted for New Hotness, the nice boy at the cell phone kiosk transferred what (awful) pics I did manage to take with O&B and transferred them to NH. A steep learning curve later (translation: about two weeks) and I learned that I can connect NH to my computer and get the pictures I take off it just like I do with my regular digital camera! Color me amazed. You kids and your newfangled toys. (Also, get off my lawn!)

So, now that Dina Knows How To Make The Shiny Thing Work, I present you with some photos of stuff I’ve taken with it. (For the record, I’ve been unable to find my actual camera, so I think this is God’s way of telling me I need to learn to use and love the NH.) I now present you with:

Remember last week or so when I was talking on Twitter about cooking a vegan casserole? Yeah. That. I have this vegan friend (okay, I have a surprising amount of vegan friends for an omnivore), and we’ve been doing a dinner thing once a week or so. I’ve been trying my hand at vegan cookery, and she rewards my efforts with the most delicious vegan desserts. The above was last week’s effort – Creamy Vegan Broccoli and Rice Casserole. It was actually edible and surprisingly good. So good, in fact, that I’ll make it again, nutritional yeast and all.

These are Raspberry Tiramisu Cupcakes and are 100% vegan! Now, before you say anything about “Dina, tiramisu is coffee and we all know about you and coffee!” rest assured I am aware of this. LVF is also aware that I despise (and am actually allergic to) coffee. But! She went easy on it and besides, AMARETTO, MAN! For booze and raspberries, I would risk it. Also, the amount of (dried) espresso in them was so minuscule that I seriously doubted it would hurt me. Fuck, I can drink a whole sixteen ounce mocha if I have to. Not that I would, but there have been desperate times when a girl needs her fucking caffeine…let’s not get into that. Anyway! Check out the inside of these bad boys:

Yeah. I ate two. In a row. DON’T JUDGE ME. Also, there is apparently a show called Cupcake Wars, but being a person who does not have (and despises) television, I was unaware of this. This recipe apparently won the show or something. I can see why!

Go ahead and judge me for this next photo, because I REGRET NOTHING: 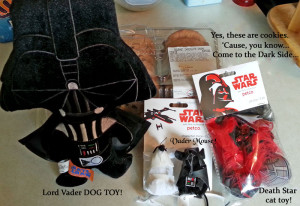 Yeah, that’s right. Those are Darth Vader cat AND dog toys. I bought ’em. Yes, I did. The nice girl at checkout said that anyone who buys Star Wars pet toys got a free pair of Yoda ears. I just gave her a Look, said “No, thank you. Give them to some kid.” Her: “Are you sure?” Me: “Yeah. I don’t do Light Side. No Jedi, thanks.” Her: *grave nod* “Understood.”

My pets all love them. Pup especially loves his Lord Vader toy. While it is demeaning to the Dark Lord to squeak, it is tremendously entertaining.

Now for the last pic!spam of the post. I took this because…because…well, just LOOK at it:

For those who don’t know, I moved my office this summer. I’m in what used to be the master bedroom. The wallpaper in here is very likely older than I am (or nearly so) and it needs removing and the walls painting. The guest bed has been moved in here and is a favorite place of the furbrats to nap, though generally not in such a position. So, a pic was in order, and since I can’t find my actual camera and NH was at hand…well…there you go.

Thus ends the saga of Dina and The New Hotness. Now that I know how to get pics off it, I’m sure more will be forthcoming. Maybe.