Warning: The following interview contains strong language that’s definitely NSFW. You should probably read it, though, given that there’s shiny things in it for you.

Today on the blog we have famed vampire assassin, Zara Lain! Welcome to my tiny little corner of the Internet, Zara. Thanks for being here! And may I say that is one stunning outfit you’ve got on?

Z: You certainly may. No one ever wants to talk about my clothes. Did you see the shoes? *shows off elegant dark red pumps covered in small spikes* Louboutin, Pigalle Spikes. I had them custom made in high quality pleather, of course. I know a guy. 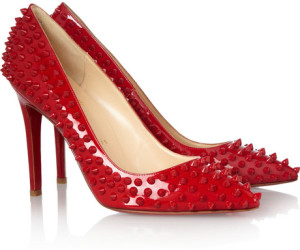 I did see those, and they are very nice! Your guy does excellent work. Now, for those who don’t already know you (how could they not?), how about you tell us a little bit about yourself? Where you come from, what you do…a price list if you’ve got one handy….

Z: Romania, originally, because mmm, vampire clichés. I’ve been around for three hundred years and shoes have vastly improved since then. I’ve done a lot of different things because every few decades I get bored. Currently I kill people for money. I mean, I’ll sometimes kill you for free if you piss me off but I much prefer a transfer wired to my bank account first.

I’m one of those “If you have to ask for a price, you so can’t afford me, sweetheart” kind of assassins. You know how it is.

Indeed I do, and that’s a fantastic policy to have. Tell me about your work. What’s your favorite kind of job? Do you have a preferred weapon?

Z: I like a challenge. I don’t mind a bit of subterfuge to get close to a target, a nice, up-close-and-personal kind of kill. I fucking suck as a sniper—it’s a lot of math, and I don’t like crunching numbers when I’m putting a bullet in someone.

Weapons…oh I am very partial to my guns. My go-to is a Desert Eagle, .50 AE because it just makes one fucking hell of an impression, you know what I mean? And as you know, I also tend to cart around a Rossi 12 gauge. *wink*

Those do tend to get the job done, don’t they? Speaking of jobs, is there one in particular that stands out as memorable? One you enjoyed more than others?

However, I do have a rather, uh, overdeveloped sense of revenge. I love revenge killings. There was this woman who had been raped when she was younger, and while she overcame that trauma and became a highly successful, wealthy woman, she still held a bit of a grudge. Duh. So when she hired me to track down that rapist later in life and kill him, I cut off his dick, shoved it in his mouth, and then cut off his head. Which I sent to her. With a bow on the package. A creative flare now and then is justified.

I couldn’t agree more. What about downtime? Is there a place you like to hang out? You know, after work, a place to relax, that kind of thing?

Z: I spend a fair amount of time at Alchemy Red. It’s in the city’s harbor district, where I live. A few centuries ago it was an occult-type shop, but it grew into a tavern and now it’s a full-blown nightclub and bar for supernatural types. I love me some bar fights.

Who doesn’t love a good bar fight? What about your home life? What’s an evening at Zara’s house typically involve?

Z: It’s usually more mornings than evenings—sunlight allergy and all. I have…friends, sort of, who I hang out with. Mostly they are people (I use that term lightly—they are all supernatural with a variety of talents) who are of use to me.

Is there anyone special in your life at the moment?

Z: Well, I’m still partial to firemen, but there is one special little man… *flicks her fingers* *enormous smilodon populator walks over, sits at her side* *he starts purring when she scratches his head* This is Sir Rodney Ballsgalore. If he gets up and turns around, you’ll see why I named him that.

I think I can guess. He’s a gorgeous boy. Now, what about your hobbies? What do you like to do when you’re not working?

Z: There is thankfully a Law & Order repeat always on somewhere, so yay for TV. And I can be persuaded into computer games, even MMORPs unless my best friend’s girlfriend is playing. She goes all Leeroy Jenkins and gets us killed and by Jeebus I just outed myself as a reluctant nerd with that reference, didn’t? Fucking Nicolette…

Indeed you did. Though I think they prefer the term “geek” these days. They tend to have better social skills and fashion sense than nerds. Your penchant for fashion is something of note in certain circles. Do you have a favorite designer?

Z: Probably Valentino. And I…don’t necessarily dress in super high fashion, but I like well-made clothes designed by professionals.

I can appreciate that. You know, I imagine, a little about my characters through Skyla. Which one of them would you most like to hang out with?

Z: First of all, I would love to set up a playdate with Rodney, Nothlet, and Rambo. Rodney prefers killing humans but he’d take on all manner of creatures, I’m sure, and the three of them could have a great time chasing snake heads.

For me, I think I’d have some fun with Kyle. He’s very pretty and he dresses well. We could go to the opera. Granted, it would last about ten minutes before I did something to irritate him (I mean, I accidentally started an apocalypse that one time) and I get in a lot of gunfights, but we’d look totally hot side by side. Actually, come to think of it, the universe might implode with our joined hotness. Bah, I’d still go for it. TOTALLY WORTH IT. *flicks hair dramatically*

I also kind of want a Billy. Because reasons.

I’ll be sure and pass that on to Kyle when I see him next. Don’t be surprised if an invitation to the opera arrives soon. Kyle does prefer Armani, just so you know. Vampire clichés and all that. Once again, Zara, thank you for being here! It was a genuine pleasure to have you stop by. You’re welcome back anytime.

In case you haven’t realized by now, Zara Lain is an amazing (and fashionable) character from Skyla Dawn Cameron’s Demons of Oblivion series. She makes her (gorgeous) appearance in Bloodlines, the first of the series. 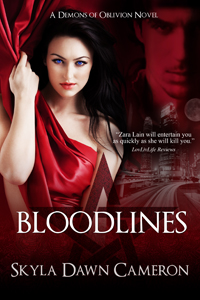 If you’re in her way, it sucks to be you.

After three hundred years of unlife, narcissistic vampire Zara Lain has seemingly done it all, and she’s now making a living as a successful thief-turned-assassin. Her newest assignment seems simple enough: kill the aging leader of the O’Connor coven and his only heir, and she’ll have another ten million in the bank.
But in the dangerous world of the supernatural, few things are ever “simple.”

When a massive assault decimates the continent’s population of powerful witches and warlocks, and its orchestrator has vampires being hunted down and captured, Zara realizes the tables have turned and now she’ll be playing the hero. Forced to join with a smart-mouthed fellow vampire, a demonologist who’s also a fan of hers, a recently widowed—and frequently brooding—warlock, and her best friend’s mom, Zara’s grudgingly willing to do what she can to save the day.

If only people would stop ruining all her outfits…

A diverse cast of characters come together in classic urban fantasy about monsters, the people who hunt them, and the occasional apocalypse. Snarky humor, magic with bite, nonstop action, a dose of romance, and at its core: broken people finding family in one another.

Now, this week only, you can get Bloodlines on Kindle for free.

Warning: contains heavy doses of snark, a sexually confident heroine who likes killing people and has no secret heart of gold, lots of explosions, and very naughty language.

And there’s more. Lots, lots, LOTS more. And you should read it all. Here, I’ll give you a list.

Who is Skyla Dawn Cameron? Here, I’ll just leave this here for you:

Her early storytelling days were spent acting out strange horror/fairy tales with the help of her many dolls, and little has changed except that she now keeps those stories on paper. She signed her first book contract at age twenty-one for River, a unique werewolf tale, which was released to critical and reader praise alike and won her the 2007 EPPIE Award for Best Fantasy. She now has multiple series on the go to keep her busy, which is great for her attention deficit disorder.

Skyla is a fifth generation crazy cat lady who lives in southern Ontario, where she dabbles in art, is an avid gamer, and watches Buffy reruns. If she ever becomes a grownup, she wants to run her own pub, as well as become world dictator.

You can visit her on the web at www.skyladawncameron.com. When she’s not writing or being glared at by cats, she’s probably on Twitter. You should ping @skyladawn and tell her to get back to work.

That enough for you? No? All right, fine then. Here’s more dates on Skyla’s blog tour this week. 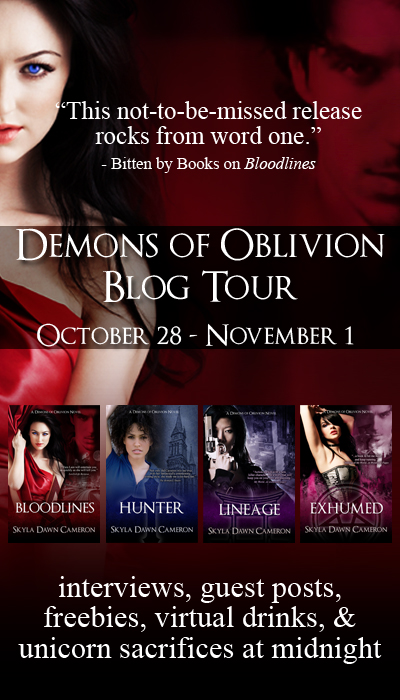 Remember when I said up top that there would be shiny things in it for you if you read this post? I never joke about shiny things, and here they are.

In honor of Zara and her love of shoes, I’m going to give away a $25.00(USD) Zappos.com egift card to a random commenter on this post. (US residents only, I’m sorry. Zappos doesn’t ship internationally. If you’re an international reader and you win, I’ll substitute a Powell’s Books gift card instead. Or hey, if you’re a US resident and win and want the book card instead, I can do that. I’m flexible!)

That’s it. Comment on this post, I enter you to win (unless you specify in your comment that you don’t want to be included in the giveaway). One entry per person. (Comment all you want, you’re still only getting one entry!) Winner will be chosen by the Almighty Random Number Generator at Random.org on Monday, November 4.

So go forth! Buy all Skyla’s books. Read them. LOVE THEM. And leave a comment below to enter. 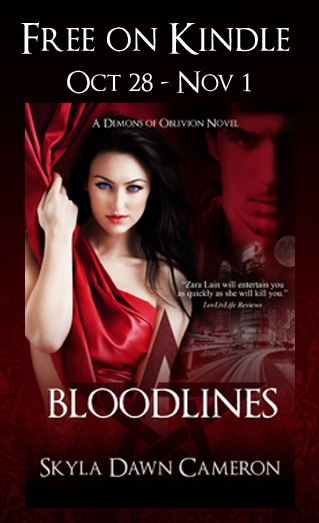