I was tagged by Skyla Dawn Cameron for this, so here’s my post:

What is the working title of your book?
Time Heals (confirmed and contracted, not working)

Where did the idea come from for the book?
It’s a sequel to the first Stranger Things book, All Wounds.

What genre does your book fall under?
Young Adult

Which actors would you choose to play your characters in a movie?
See this post I did for The Bookaholic for whom I’d choose for the main characters. Time Heals introduces a couple new ones that I really can’t pick an actor for (as they’re not entirely human).

What is a one sentence synopsis of your book?
In a world (look, I had to, all right?) –

Ethereal beings are disappearing and it’s up to fledgling Healer Rebecca MacDonnell to find out where they’re being taken and why.

How long did it take you to write the first draft of your manuscript?
Uh…let’s not talk about that, mmm-kay. *looks over her shoulder for her editor* *cough*ayearorso*cough*

What other books would you compare this story to within your genre?
It’s way too early in the morning to think about this without more tea. I don’t know.

Who or what inspired you to write this book?
My editor and the fans who loved All Wounds. You might even get a third Stranger Things book out of me if you’re good.

What else about your book might interest the reader?
Time Heals is a little darker than All Wounds. We meet new characters such as dryads, tomte, goblins and gnomes. As Rebecca’s knowledge of Ethereal Healing grows, so does the danger.

So there you have it. I was supposed to tag four people to do this after me and link them here, but everyone I asked had already been tagged, so THIS DIES WITH ME! Well, sort of, anyway. 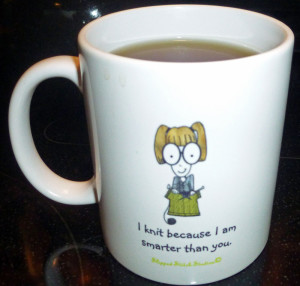 One of my Christmas gifts. It says, “I knit because I am smarter than you.”

2 thoughts on “The Next Big Thing Blog Hop”