Look, I had to throw the pun in there, okay? I just had to. The jokes write themselves here, people. Thank you! I’ll be here all week!

This post will be link-and-pic heavy, so I’ll just put a little cut in here to spare your connection.

Anyway, to the point. For awhile now, I’ve been following Jodi Meadows on Livejournal. I don’t remember how I found her, just that it had something to do with her beautiful yarns. I learned later that she’s also a writer with her debut novel INCARNATE coming out in January 2012.

She is solely responsible for the madness that follows. Let’s get that out of the way right now.

Now, most of you know I live on the Oregon Coast. It’s a wonderful place to live, and we have a thriving artistic community. Local theatre, community radio, art walks and galleries, farmer’s markets, you name it. We’re big on expression, whatever the flavor – music, art, dance, crafts. Wonderful local restaurants, independent businesses, community college …we’ve got a lot here. So, when I wanted to learn to spin my own yarn for knitting, I needed look no further than our local fiber arts academy.

DISCLAIMER: There’s a lot more to spinning than what I’m going to talk about here. This is just barely scratching the surface. There’s a lot more for me to learn. I’m just going over the basics of what I learned so far. Do not take this post as gospel, and forgive me if I’ve left things out. Mistakes are mine, etc.

So! Back to the Academy!

I met my awesome instructor Shannon there. 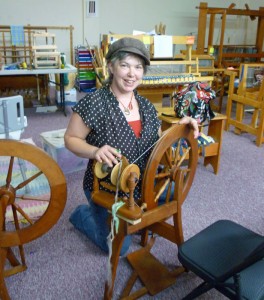 We talked awhile about what’s what. I got a tour of the parts of the spinning wheel and how they work. 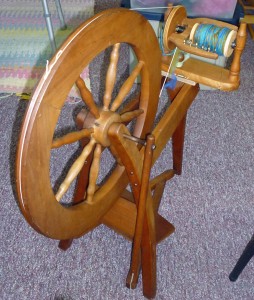 Next I learned about fibers and types of what’s called “roving.” Roving is fiber that’s been prepared for drafting. We were working with wool. 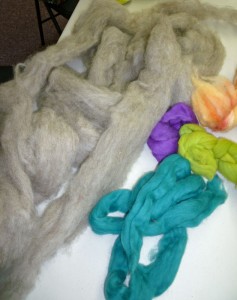 Next I learned to pre-draft the roving to get it ready to spin. Basically this means you pull the roving to the proper length of the fibers in it to make it thinner/spinnable into the size of yarn you’re wanting. Some wool/fibers have a shorter length, some have longer, so your draft length (how far you pull/separate the fibers) depends on what kind of wool/fiber you’re using. Here, watch this YouTube video if you’re curious about what this step entails.

Drafting the roving was actually quite difficult for me, but I’m sure with practice it will come easier. It was very Zen and relaxing, but all I could think about was my cats trying to “help” me do it at home if I made spinning a new hobby.

Once my mass of roving was pre-drafted, it was ready to spin.

Time to face the wheel! 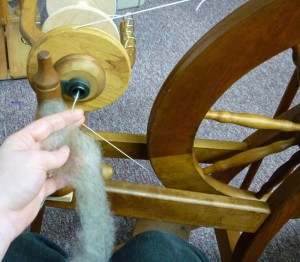 It puts the roving on the leader thread.

Now, spin, Dina! Or um…not. Things…happened. There was much giggling by me and maybe some swearing and the occasional Shriek of Mistakery (you know the sound I mean!). My instructor helped me immensely, and I did manage to make something kind of work…sort of…. 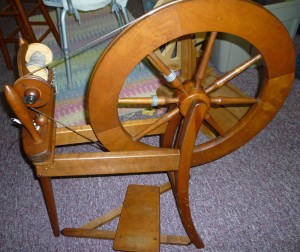 See? I made yarn there on the spindle! And I didn’t break anything!

The treadling was a bit difficult for me and Shannon had to help me out with getting the wheel to spin in the right direction, but eventually we/I made something resembling a knittable yarn. See? The color is officially called “oatmeal” but Shannon and I decided we liked “silver” better. So I made a silver yarn. Sort of. 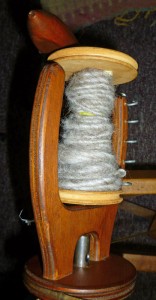 See! I made yarn. Sort of. And I didn’t break anything!

Then it was time to go home. But! Not without homework, due next class! I was sent home with two bundles of carded roving to pre-draft. 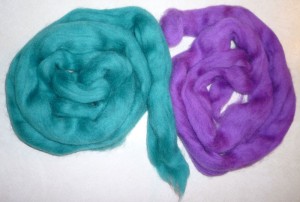 My cats are going to have a field day. I’ve already hidden it from them and will be sure and close my office door so none of them try and “help” me with my homework.

Thoughts: I’m not sure if I’m ready to make spinning my newest hobby. I can just see the cats thinking the spinning wheel is a giant cat toy. I wanted to learn to spin for various reasons, but I’m not sure if I have the patience or talent for it. I realize I’ve only taken one class/given it the barest of goes, but I think it’s been enough to help me at least figure out if I’m interested in it. There’s so, so much more to learn and I’m not sure about it.

Of course, having said that, I wasn’t all that interested in knitting when I first learned to do it in my teens. Now I’m a knitting fiend. So you never know!

More after next week’s class!

One thought on “Dina Spins A Yarn (No, Really)”