It’s okay. Just. I’ll be all right. I think. I hope. I mean…it’s still my Sithmas tree, only now the walls behind it are beige instead of red because of the De-Gothening. Hopefully by this time next year, we will have a new house in which the walls will NOT be beige. But it is not this day.

Still. I can manage. I can cope. OHMYGODIT’SBEIGEIT’SFUCKINGBEIGEICAN’T-

*ahem* I’m fine. Really. I have bigger problems to deal with than a beige Sithmas. I mean, my cat put me in the ER. I’m not kidding! Look!


It was this guy, right here: 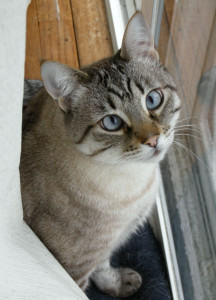 I mean, his name is literally “Trouble,” so I shouldn’t be surprised in the least. How did this happen? Well, I’ll tell you.

I was asleep then I heard a crash and he landed on my head and tore out of the room like demons were on his ass. I sat up and switched on the lamp, both instantly awake and aware of my ear hurting. He Who Enables My Crazy was instantly awake at the noise as well.

Him: What was that?! *looks around for broken things*
Me: Trouble, I think…fell or jumped off the headboard onto my head! I think he got my ear. *turns head to the side to show hubby*
Him: Oh, God. He sure did.
Me: *feels something wet dripping down my nose and turns to face hubby* Did he-
Hubby: JESUS FUCKING CHRIST! *grabs tissue and presses it to my forehead* Into the bathroom, now!

Seconds later we determined that an ER trip was necessary. Facial lacerations bleed like hell, but this was a deep one more than an inch long, and those need medical treatment. We managed to get the bleeding stopped rather quickly, but the wounds needed to be cleaned with more than we had on hand and possibly glued. Stitches and faces don’t really go well together, but there were other things that could be done to repair the damage. Plus my ear was torn all to hell as well, plus this was done by an animal. Cats – even indoor-only housecats whose shots are kept current like mine – harbor nasty bacteria in their claws and teeth, and we all know Dr. Dina believes in tetanus shots. Mine was technically all right as it was updated within the last 10 years, but the medical community likes it to be done every five years, so it was time to get that done as well.

They took me back and cleaned my wounds with a strong antiseptic solution. They gave me a tetanus/diptheria/pertussis booster (TDaP) and set about cleaning the wounds. The ear was the most painful because it’s cartilage and there’s not a whole lot they can do for it besides clean it really, really well. Cleaning the wound meant removing the scab that had formed when we got the bleeding stopped, and that meant it bled more, which meant it had to be stopped again, and direct pressure is the best way to get bleeding to stop for most lacerations.

And by “direct pressure” I mean that the gorgeous male nurse wasn’t enough to distract me from the OH MY GOD THIS FUCKING HURTS death-grip pinch he had my ear in. Don’t worry – numbness sets in after a few minutes and so you don’t feel anything until they move or release it to check the bleeding has stopped and OH MY GOD HE’S DOING IT AGAIN FUCK FUCK OW–

Eventually the ear was sorted out and he moved onto the forehead. Compared to the ear, this was nothing. Much wetter, but I had a towel to catch the drips. I couldn’t appreciate the male nurse while he cleaned my forehead, because the solution and my eyes (which we discovered when I closed them that the left one had the tiniest nick right along the lash line – he cleaned that too). When he had everything good and clean, the doctor came in to see about how to treat it, and agreed with Pretty Male Nurse’s treatment plan of using Steri-strips to hold the edges of the forehead lac in place. You really don’t want to sew the face if you can possibly avoid it, because scarring, and cat scratches have a terrible tendency to get infected. If that happens, you have to take the stitches back out to deal with the infection, la la la…it was just easier to leave it to heal on its own, with the adhesive strips to give it a little more stability while it did that. My wound had cleaned up really well and the edges had good approximation, and less is really more when it comes to wound care. First do no harm and all that. The less you can do to disturb the wound, the better it will heal. Even cleaning too often or with the wrong solution can slow healing down. I know, it sounds like an oxymoron, but it’s true.

So a little more cleaning, a little more tidying, some adhesive glue and a few strips later, and I was good to go. They gave me a prescription for some extra-strength antibiotics and sent me on my way to heal on my own. Pretty Male Nurse said to leave the strips on for five days, and this happened on Tuesday, so I’ll be staying in the house until Monday next week. I really don’t want to go out looking like this: 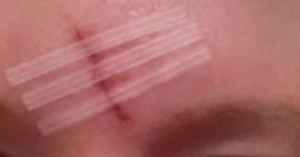 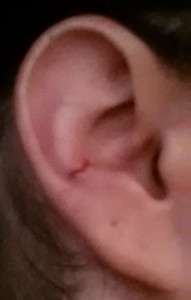 Oh, and the best part is…I’m going to scar! That’s right! Yours truly is going to have a Mark of Badassery right between her eyes (and on my ear, but that one shouldn’t be all that visible). I scar very, very easily (hi, extremely pale skin), so it will be interesting to see what this one will end up looking like.

You know, I’m all for permanent literary marks on the skin. My tattoos are proof of that. However, while I am a fan of Harry Potter, I really didn’t need a scar on my forehead to attest to that.

Guess I’ll be knitting that Slytherin House Scarf sooner than I planned.

Pretty Male Nurse advised me to stay out of the sun, as it will make the scar show up more clearly.

Me: Yeah, not really a sun person. I’ve got no problem staying out of the light.

Out of the light! Brilliant!

*turns off lights in the living room*

Ahh! There we go! Sithmas proper! 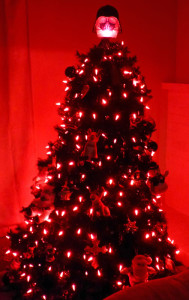 And of course, the Darth Vader topper for the Sithmas tree: 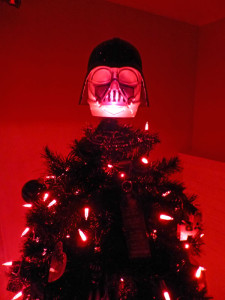 There. Much better. And I have official advisement to keep out of the sun. Thank you, Pretty Male Nurse! You’re so going in a book someday!

And now it’s time to take my antibiotic.