So it’s been ten days today since the Lord of Chaos has been home from the hospital. (Cut for tl:dr/not interested veterinary stuff.) 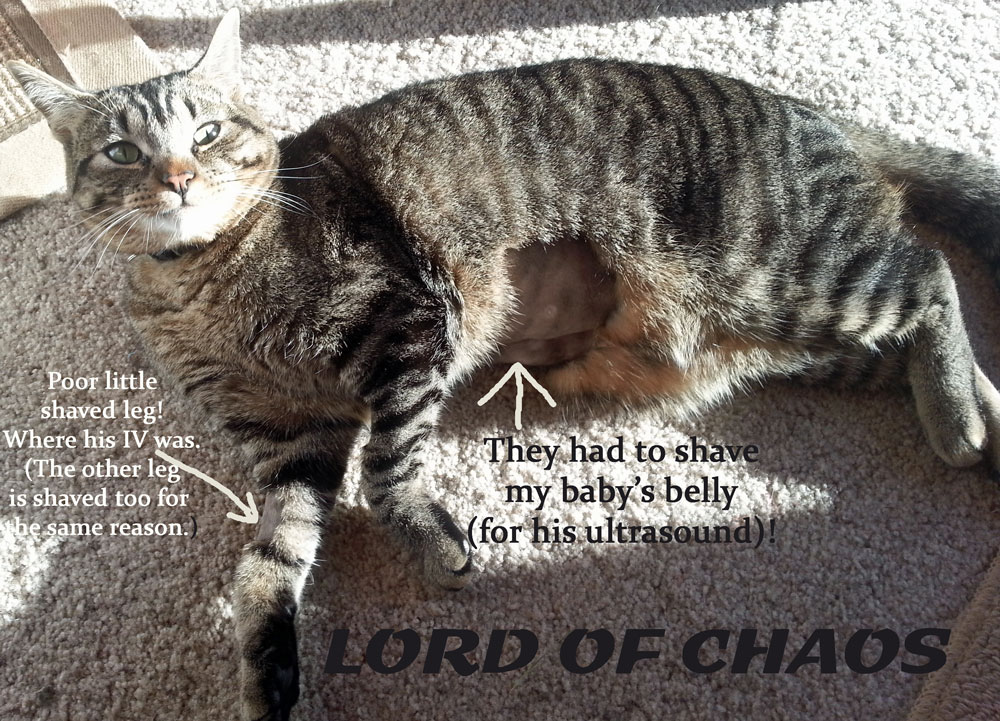 He’s doing well. We’ve been back for a recheck of his kidney function (BUN and creatinine levels), and they had dropped. YAY! This is what we want! Normal (well, normal for a little guy with only one functioning kidney) levels!

He was home about a week before he started sneezing.

No, I mean really sneezing. Like eight or ten times in a row. It was hard for him to breathe properly and it was clear he had some kind of upper respiratory thing he picked up in the hospital, so we put in a call to the vet and got a prescription for some antibiotics. Normally, if something is bacterial in nature, it responds to antibiotics within a day. Two at most. Lord of Chaos was on them for four as of today, and there was very little improvement. So you know what that means?

Now, Lord of Chaos is not a well baby. Dehydration can send him into crisis faster than Han Solo made the Kessel run (Google it!), and anyone who’s had a cold or flu has been told “rest and fluids.” While ill humans can gulp down OJ, ginger ale, tea, broth, and other liquids while they don’t feel well, cats really don’t have that option and really aren’t interested in drinking a lot anyway. He Who Enables My Crazy and I are both trained (though former) health care professionals, and we’ve been monitoring our boy for dehydration (called “tenting” in the fancy medical speak) and checking his vitals. While he was staying hydrated and his vitals were WNL (“within normal limits”), he was still sneezing and not responding to antibiotics, and it was clear from his slight lethargy and decreased appetite that the poor boy wasn’t feeling so hot. (Hey, you know how you feel when you’ve got a cold! Who can blame the little guy?) Given his recent hospitalization, I didn’t want to take any chances of him having a relapse, so, back to the vet we went.

He’s lost the weight he’d gained last week (you know how it is when you’re not eating much/have a cold), but everything else was fine. His temp was normal (remember he was hypothermic before he was diagnosed?). His lungs were clear (so no pneumonia, just an upper respiratory infection/cold). Just to be on the safe side, they rechecked his kidney function.

BUN/creatinine levels were down even MORE than they were during his last recheck. Not a phenomenal amount, but enough to count as a decrease. So, despite his upper respiratory infection, he’s doing okay otherwise. His recovery is still on track. (Keep those fingers crossed, though!) He’s still supposed to finish his antibiotic liquid just to keep any opportunistic infection at bay (like an ear infection or sinus infection) considering the poor little dude has a compromised immune system as it is, and he’s only got three more days left of it anyway. Might as well finish the course, just to be safe. His health right now is a tenuous thing, so we’ve got to try and stay ahead of anything that might upset the balance.

As for the moment, he’s sneezing a little less. He ate well at dinnertime. He’s improving slowly, but he is improving, and that takes a load off my mind. We’ve been so worried here.

He’s due for another recheck in about a month, so we’ll see then how well this new diet he’s on is working. He has a supplement too he’s supposed to be taking, but he’s been so sick with his URI (upper respiratory infection) lately I haven’t wanted to torture him twice more times a day with it. If he’d just eat it in the Pill Pocket, we’d be golden, but he eats the Pill Pocket and spits out the supplement. *facepalm* So it’s going to have to be given the hard way. I’m already cornering the poor little dude twice a day to give him his antibiotic. Let’s let him recover a bit before I force what’s basically kitty yogurt in pill form down his throat. Hell, we might even wait until his recheck next month to give this stuff a try. Now, I’m all for alternative medicines and so on, but this shit’s expensive (if we go with it, I’ll be ordering it online vs. paying for it at the vet’s office, because DAY-UM, hi, double the price!), and most everything I’ve read online says it’s bullshit, but my vet believes in it and they’ve never steered me wrong or blown smoke up my ass or given me anything but the hard truth, and I trust them implicitly, so maybe all the stuff I’m reading is about an older study done where the capsules are sprinkled on food as opposed to given whole on an empty stomach (this makes a big difference). So I don’t know. I welcome comments/personal experience to help me decide on the worthiness of this supplement. Maybe we’ll just have to try it and see for ourselves if it makes a difference. But not until he’s over his cold.

He’s okay for now. Let’s hope it stays that way.

Now for dinner and some trash TV on Netflix. For some reason, mindless TV with people yelling at each other makes one of my characters happy. You haven’t met him yet, but yeah…he likes trash TV. God help me. I’m watching shows I’m embarrassed to admit to watching.

At least I get to call it “research.”