I suppose I should just go chronologically, since it’s been a couple months since I’ve said anything here. Okay. *sigh*

December – Birthday. Sithmas. Made a Boxing Day pie with hot water crust pastry. It was actually pretty good, though I learned a few things about the springform pans I used.

Also lost my dog of nearly 11 years that I raised from a six-week old puppy. 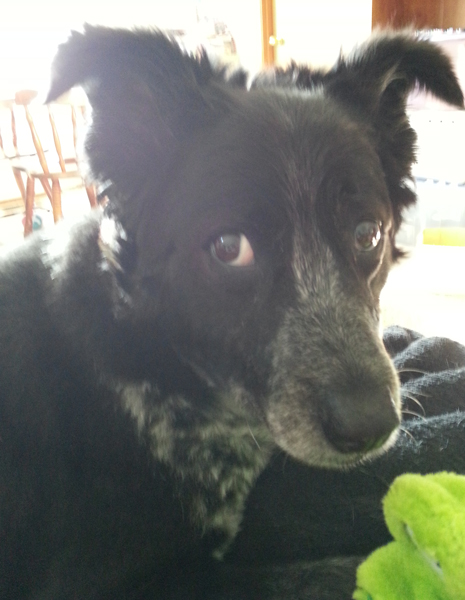 This was my dog. His name was Elrohir. He was named after one of the twin sons of Lord Elrond in Lord of the Rings. (They weren’t in the films, thank God; they only get a short mention in The Silmarillion – Elladan and Elrohir.) We called him Ro for short. Mostly we called him Ro-Pup.

He was an awesome dog. He had his share of demons, let me tell you. He was diagnosed with schizophrenia — yes, dogs can get it too, and he had a severe case of it. He had both neuroses and psychoses (neuroses are more behavioral/emotional responses while psychoses are generally physiological in origin, resulting from trauma or disease such as a brain tumor or cancer). We managed what we could as things presented themselves, and last year was the worst of them. I was advised to consider euthanasia earlier in the year due to his increasing unpredictability and aggressive outbursts, but I was selfish and wanted one more holiday season with my special boy.

Fuck yeah I was selfish, and I don’t regret a fucking moment of it. And for all his issues, there is a hell of a lot more sadness than relief in this house. Not even Bee was this difficult to say goodbye to, and she was my bestie.

A friend tells me it’s because I couldn’t see the pain Ro was in like I could with Bee, and she’s right. I couldn’t. I knew it was there, and could see the aftereffects of his mental anguish (and sometimes while it was happening — lights on, no one home), but it wasn’t like he was physically broken. Sure, he had a little arthritis and some spondylosis going on, but he was an older, medium-sized dog, and those were normal for his age.

I know it was the right time to say goodbye, but damn it I didn’t want to. I, and the entire house including my friend who was here with us (thank God – I’d never have been able to get through it without her here; she was there when we rescued the little brat) was a wreck the entire week leading up to the appointment. (I wanted a specific vet who’d known him all his life to help him and be there with us.)

We made that last weekend we had with him special. We’d stopped leaving the house with him because of his anxiety and fear of (and tendency to be aggressive toward) strangers, but we made sure his favorite beach was fairly well empty and took him to see the ocean. He had his customary 10 minutes (he’s was never a fan of the sand) and then tugged us back to the car. We got him all his favorite foods and fed him from the table (a huge no-no). We did everything fun we could think of for him the last few days and gave him lots of hugs. We played as much as he’d tolerate (he was, after all, an semi-old man in dog years and didn’t much care to chase your ball, thank you very much). We napped a lot those last few days — his favorite thing the last year or so was to “take a nap.” He’d get his favorite toy (Lambie) and run to the bedroom, waiting. 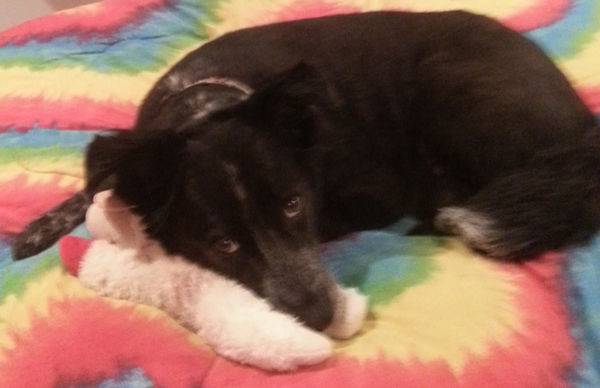 The James Household is so empty. It’s amazing how much of our daily routine revolved around Ro and his special needs. I can’t go more than a few minutes without being somehow reminded he isn’t here, and it sucks so much.

Though there is more sadness than relief here, like I said, there is relief (and guilt for feeling relieved, of course). Relief that when the wind shakes the house and the rain pelts the windows my poor dog isn’t cowering in the corner, shaking in fear, wide-eyed at the noise. That I’m not running for the Thundershirt and putting on relaxing dog music I bookmarked on my iPad every time the weather comes in off the ocean, which is frequent where I live. (He was already on medication, so I couldn’t give him anything else to help calm him during his fearful episodes, which there at the end were near daily.) I’m not praying every time I go outside that there isn’t someone getting out of their car across the street and slamming the door, or the people building a house up the block aren’t using their nail gun or throwing boards around. (He wouldn’t go outside/go pee if he heard any kind of bang or pop or smack or crack.) I do still cringe every time I hear a whistle blown on the TV (they sent him into an absolute fit) and look around to see if he heard it, which is followed by relief that he didn’t, and then sadness because he isn’t there to hear it.

I’ve mentioned before that pain makes me angry (oh, all right — angrier than usual), and I am in vast amounts of pain. This sucks and I’m so angry. He was my brat-face. I slept on the couch for six months with a little area of my living room cordoned off with baby gates and puppy pads, taking him out every few hours until he was potty trained. He was also crate trained when he got older, and when he got older still, we abandoned the crate all together except for when we left the house. It was “his room,” and he loved it. It’s still here, in my office, the door still open from the last time he was in it. And damn it I hate the idea of moving it, so it’s just going to fucking sit there until I’m ready to move it, which may be never. It makes a nice end table.

We do know under no uncertain terms that we do not want another dog, no matter how old/whatever condition they’re in. Not because of any kind of bias against them, but because my husband and I are both disabled, and taking care of a dog isn’t at all like taking care of a cat, special needs or no. I’ve mentioned on Twitter that I volunteer with our local animal shelter three days a week now, and am also a foster for neonatal kittens (those too young to be adopted/have been abandoned/have no mother/need bottle feeding) when they come into the shelter system. When we first brought Ro home, I’d just been diagnosed with MS, and my disability was a lot more manageable. Now it would be totally unfair to try and meet the needs of a dog. I just don’t have it in me anymore. I can barely walk unassisted myself these days. Ro was an old man who wasn’t interested in walks or ball (arthritis, people, harumph harumph) that often, though we made it a point to mosey to the mailbox and back a few times a week. That’s all he wanted, and more than once these last few months we had to stop on the way back to rest (him, not me).

Cats, even bottle-fed kittens, are wholly different from dogs, and I’m still able to care for them. As it is, all my cats are special needs animals. Two are seniors themselves, and I will likely lose one of them before the year is out due to his health problems (fingers crossed that doesn’t happen, but it’s a possibility if we can’t sort him out again).

It’s only been a couple weeks since we said goodbye to our special, wonderful boy, but it feels like forever. We’ve gone through his toys and given away the majority of them to the shelter to help them raise funds for other dogs who don’t have the home he did yet. We took his food and medicines to the vet’s office and donated them to other dogs in need. His beds are still here as I can’t bring myself to part with them yet, and his favorite toys are still where he left them. I keep stepping on one when I get out of bed, and I don’t care. I used to step on them all the time when he was here (he had a lot of toys – our boy was spoiled rotten) and I’m not ready to move them, either.

His remains are on the shelf in the glass cabinet along with those who’ve gone before him. We’re getting pictures together to make a memorial wall above it – one portrait for each animal who has passed on in the eighteen years we’ve been married. Ro’s passing has hit us the hardest, because he’s been the only dog either of us has had that we raised from a puppy. He was our boy. He was with us for over a decade, through events both horrific and joyous. We were with him through his bouts of illness, both physical and mental. We held him through nights of terror and days of fear. Saying goodbye to him was, without doubt, one of the hardest things I’ve ever had to do, and those of you that know me know I don’t say that lightly. It took the two people closest to me at my back to give me the strength to walk into that room where they’d made him a lovely bed complete with velvet pillow for his head. I have no shame in admitting I have cried every day both leading up to the appointment and every day since. I’d really like to stop, but I keep getting angry, and I cry when I’m angry or in pain.

And this fucking hurts. Then I feel strange, because I honestly didn’t cry this much for my Bee-girl, and she was my baby. Nor did I do this for my Daddy, who has been gone seventeen years today, and he was my best friend in the world. I miss him all the time. Hell, I even signed the order to take him off life support and held his hand as he died there in the hospital, and it didn’t hurt this long, or this much.

Before anyone says anything about grief and grieving, I’ll repeat what I said when I lost Bee:

You know how there’s these supposed stages of grief? Yeah, those don’t apply to me. I have been viciously wounded, and pain makes me angry. (All right, fine – I realize “anger” is a terribly vague word to use to describe me, because that’s my default setting. This is a little different.) I have…interesting responses to pain. By “interesting” I mean…uh….

Yeah. I’ll come back when I’m able to drink tea with another person again. That might be awhile*.

Anyone who is stupid enough to think (let alone say aloud in my presence) “she was just a cat,” I refer you to John Wick.

Farewell, Ro-pup. May all your demons be vanquished. You tried so hard to be a good boy, and you ended up being the best. We love you.