2016 was a hell of a year for many reasons, not the least of which was the United States Presidential election. [This went on way longer than I thought], but I will say this:

RESIST, MOTHERFUCKERS. Make no mistake – this is what tyranny looks like. This is what fascism looks like. NONE OF THIS IS NORMAL. Bigoted Nazi assholes being appointed left and right with zero Senate confirmation, people being fired because they won’t enforce illegal orders (huh…why does that sound familiar? I guess they should consider themselves lucky that they weren’t hung in the town square on public television, but baby steps, amirite?) on and on and on and on. And we’re only 10 days into this shit.

It’s easy to compare things we don’t like to Nazis. But the current administration (not duly elected, but that’s another issue) is straight up, self-admitted Nazis, and yes, you should be worried.

More than that, you should be angry. It doesn’t matter what side of the political spectrum you fall on (unless you, yourself, are an actual Nazi as well, in which case you are the problem being discussed here and need to leave before somethin’ bad happen to you.), this affects you. 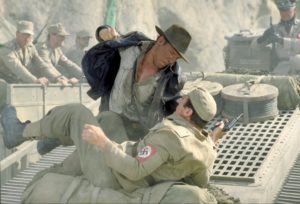 This bullshit travel ban thing? Yeah. That applies to me, to my overseas friends wanting to visit, to anyone and everyone living here or who wants to leave here.

No, this is not alarmist rhetoric, and no, it will not all work out in the end. As I said in one of my previous posts, I am on the list of undesirables. I am broken, mouthy, and intelligent, and these are all things the current administration wants to be rid of. Next up, they’ll be getting rid of the internet and other social media, because those are tools used to fact-check, scrutinize, call bullshit on, and organize the resistance.

If you think this doesn’t affect you, you are wrong. Even if you live in some remote area, or another country, you are wrong. I could provide you link after link of stories around the world showing how this shit-show is affecting everyone, but I’m not your fucking mother and you can find out this shit for yourself if you bother to look.

If you can bear to look.

The UK is protesting Orange Fuckwit’s planned visit and petitioning Parliament to refuse him a state visit with the Queen. China is gearing up to nuke us (also, we owe them a shit-ton of money, and they could call in their loans any second and we’d be shit out of luck, because who do you think is going to pay for that?). Canada just had a shooting at one of their mosques by some fucking ignorant white supremacists asshole (IN CANADA! CANADIAN!) who is a supporter of Douchnozzle McTinyhands of the Towers.

As I said, I could go on, but you don’t need me telling you which way the wind is blowing. I’m posting this now because there’s a better-than-average chance I won’t be able to before the year is out. These are dark times. This isn’t a game or a joke or one of my stories. This is real life, which is stranger than any fiction.

My household and those of my extended family on both sides runs almost entirely on money from the government. We are military, and former military, and retired military. We are public servants and disabled veterans. Someone you know besides me depends on their Medicare, Social Security, the Affordable Care Act, and other programs put in place to support those in need. Those who have served.

This isn’t about Republicans and Democrats. This is about the humane versus the inhumane.

Now you all know me. I don’t have a lot of respect for humanity as a species, but injustice and bullying and cruelty don’t fly with me. The current administration is nothing but a bunch of outright liars, thieves, con artists and bullies. I will fight them with everything I have, which granted isn’t all that much these days. I’m little and broken and will still fight. And I will win.

Do not be silent. Do not cower in your homes, hoping the coming storm spares you (hint: it won’t). This is happening. You want it on your feet, or on your fuckin’ knees?

Is it all too much for you? Here. Read this, take a breath, make a cup of tea, watch an episode of your favorite show, get back to the fight. Everyone needs a cookie now and then.

But get back to the fight. Here, I wrote something to help you all clarify things.

My personal holy book says the world will end in fire. While I’m not convinced this Tangerine Menace is the Beast, I have to admit the description is fairly accurate. After all, even the experts are breaking with tradition and calling him out on his absolute fuckwittery.

Someone needs to remind this little fascist wannabe dictator that he and his fucking cronies are (TEMPORARY!) public servants and work for us. WE pay their salary, and we will not let our country (OUR PLANET) be stripped of fucking everything so he can live in his gold-plated tower and look down on us like some bad 70s dystopian movie.

So that’s all for now. I’m still alive. However, that may change in the coming few weeks, especially if I can’t get my medication thanks to Douchenozzle’s next idea pulling assistance from veterans. I could (and very likely will, but I hope not) lose my home as well because we won’t be able to make the mortgage if he pulls their pay for whatever fuckwit reason he comes up with to “keep Americans safe.” (WE ARE NOT PAYING FOR YOUR FUCKING WALL, ASSHOLE!)

P.S. Yes, I’m still writing. It’s amazing, but I am. So there’s that. I will write until I die. You want more stories, it’s in your best interest to fight with me and make sure I stay alive. Just sayin’.

(Comments closed because I don’t want to engage in a debate. There’s nothing to debate. Your arguments are fucking invalid and RUSSIA STOLE OUR ELECTION IN ORDER TO BRING ABOUT THIS NIGHTMARE. FUCK YOU!)